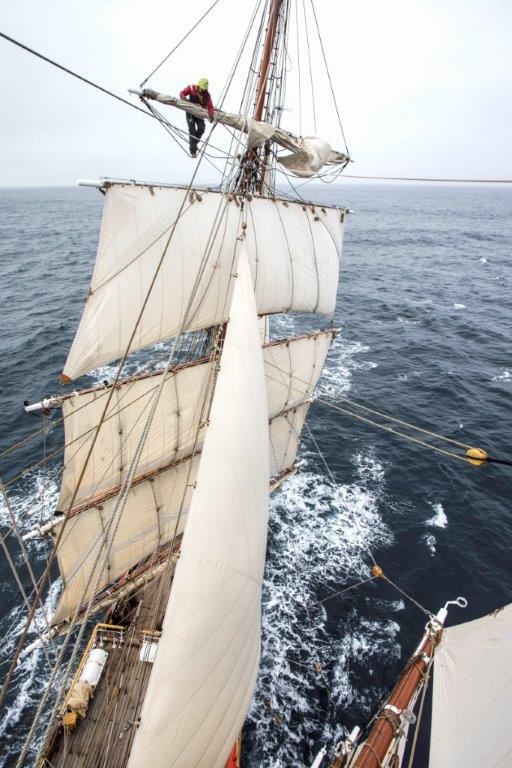 4th December 2017 Heading to Elephant Island using engines and all sail power we have.

Time to start heading South. From our position, some 200nm North of South Orkneys and course heading West, now we turn southwards facing light SW-ly winds of 12 to 15kn. Motoring almost against the wind, all sails in the head rig are furled, same with the Squares,, together with Middle Staysails. Just the lower ones remain set also with the Spanker.

At daybreak we add the Gaff Top Sail in a try to stabilise a bit more the rolling and pitching of the ship, on what had become a pretty unpredictable and uncomfortable ship’s motion. Slowly veering winds from the SW to W-ly and then WNW-ly allowed us to start setting more canvas again. First the Inner Jib comes up and a bit later, at breakfast time, we set also the Middle Staysails once more.

A snowy shower with thick snowflakes pass by at the morning change of watch, together with a drop on the temperature. But afterwards the wind veers becoming gradually N-ly, slightly rising the temperature and giving us the chance to start setting more canvas. Top Sails and Top Gallats are clued down and sheeted, together with hoisting everything in the head rig. All the rest of our canvas is set after lunch, on 15-16kn of N-ly winds. At that moment motor-sailing with everything we have, all sails set Close-hauled on Starboard tack plus both engines. Like this we reach speeds over 9kn on a good course of 235º towards Elephant Island. Through the foggy weather some growlers and bergy bits are spotted by our lookouts, so close attention is required to sight those ice pieces that often don’t pop up in the radar, mostly because of their size and the little part of them floating in the swell that is always present in the area.

After hours motor-sailing with all we have, the N-ly wind started to back, becoming NW-ly. With this new situation is time to take down some of the sails. Once dinner is finished and with both permanent watches, we quickly furl the Courses. During the next hours all square sails are clued up and furled as well. Before midnight we also strike the staysails, just to be set again during the next hour, with the exception of the higher ones and the Gaff Top Sail that are stowed away as well.

Today’s reasons for all the sailhandling and the motor-sailing are related with the weather systems passing over us and the forecast for the next hours. We actually came over a ridge of High Pressures that gave us fair winds for most of the day. We could actually sail and stop our motors, but a large Low Pressure system is building up over the Drake Passage, West of us, growing winds that will blow over 45kn. We better be on the South side of it, where lighter winds are forecasted. The disadvantage of this strategy is getting closer to the pack ice located South of us, and as a prove of it are the few growlers spotted during the journey. The idea is to squeeze as fast as we can between the Low Pressures and the ice, trying to reach Elephant Island before the strong winds will reach it.

Actually at midday we find ourselves 307nm from the coveted island, having sailed 100nm during the last 24h.

The misty atmosphere and the cold drizzle from the afternoon onwards, made difficult, uncomfortable and freezing feeling all the few maintenance jobs on deck plus steering and lookouts. Seems like reaching Antarctica will make us endure the rigours of the Southern Ocean until last moment. Despite those foul conditions, we are lucky to have a comfortable ship, a radar to locate dangers ahead, a way to look at electronic forecasts and engines to help on our progress.

On days like today (that involve thinking on routing, checking evolution of the High and Low Pressure systems and set sail and engines accordingly to our plans) we marvel on the old sailing ships that took the enterprise of plunge into the uncharted Antarctic oceans.

It is hard to imagine the human spirit and strength of this old explorers venturing in these icy areas. In the time when ships were made out of wood and sailors made out of steel, many never returned home, while others were lucky to overcame the difficulties and succeeded on sailing this treacherous waters with barely the help of a barometer, celestial navigation, and heaps of good intuition.