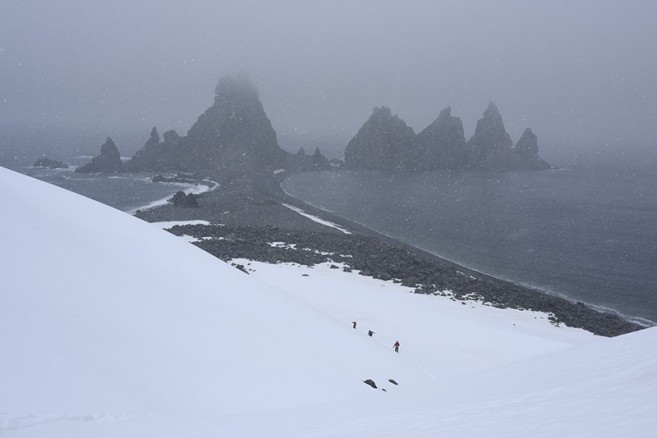 is not an island in the Errera Strait but rather refers to an USA based rugged shoe company.

The boots looked the part, were on sale and declared ‘ waterproof ‘ so this was  a winner buy for the journey down South.  Since the fancy Henki Look sailingboots had packed it in last summer after only 2 seasons, I now considered myself all set. Just to be totally sure I applied two (!) layers of fancy Hinderland wax to them and got going.

After about three landings it was becoming very apparent that the Hinderlands did not live up to their expectations and my feet started to turn into ice cubes twice to thrice daily. First line of defense was to wear binliners instead of socks which worked somewhat but a more sustainable solution was needed. So, we are here and now what to do?

Turn to the cook for Soya spread/oliveoil/butter? Take deckhand’s advice on sikaflexen the h…out of them?  When all else fails you turn to the bosun, folks. He is the secret weapon of the Bark, knowing all and everything.  From the dungeons of the forepeak he materialized with a tin of solid sheep fat and a rag: “ you slap this on & all will be fin(n)e”

I try but you know it is kind of like trying to rub a candle on a boot…Did I not silently smirk at my cabin peer for bringing a hairblow dryer to Antartica on our square rigger? With a deep bow I asked her for it… Would she lend it to me? Yes! A woman of true candour.

Back to the forepeak armed with all of the above. Stuck the boot in the benchvice, blowdryer on full throttle and the dead sheep grease spread like butter on hot toast. The real moment of victory came soon on the next landing when seawater was trickling of my boots instead of seeping in and I got back with dry feet for the first time!

The odorous aspect of this top product on my now pampa boots pales amongst the fragrances below after a full week of sailing with all 58 of us; in case you were wondering.