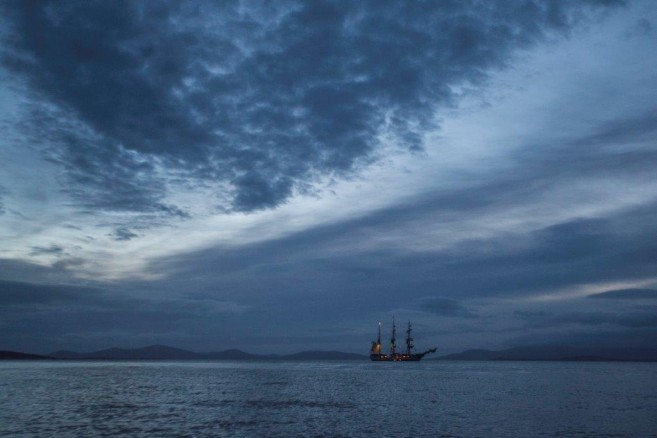 We experienced all the typical weather situation of a Low Pressure System passing over us. Early in the morning strong NE-ly winds blow over the whole area, gusting about 30kn, leaving afterwards a quiet afternoon when the eye of the Depression was on top of us, time we used to do a great landing at Grave Cove. But just before dinner the weather became nasty again, now SE-ly winds suddenly blast over us, with peaks of over 40kn. Luckily by that time we were all back on board. Europa battles her ground and stays put at her anchor on good holding seabottom.  Decreasing SW-ly winds are forecasted for later, and lighter kinder conditions that may allow us to go ashore tomorrow at West Point Island.

The clear skies, calm seas and light breeze from last night, changed this morning into a solid stormy weather. At dawn a second anchor was dropped to withstand the gusting winds over 30kn, while the low clouds and rain limited the visibility, making it difficult sometimes to see even the coastline, distant just a nautical mile. On that weather conditions the best thing for us to do is to sit and wait for the forecasted weather improvement. In the meantime, we spend the morning listening to a couple of talks. First Katelin explained a bit about history of sailing and how the ship’s rigs have been evolving and improving with the times. Later, Jordi went on with his accounts on his involvement with research groups studying Black-browed albatrosses.

The Quaternary Research Centre (CEQUA-Fuego Patagonia) in 2003 was lucky enough to find a newly colonized area for those birds, where they started to nest. Since then they have been keeping an eye on the colony, following its growing success and studding some other aspects of those amazing birds, like population genetics, diets and their movements in the area. It is interesting to have some more insides on the hands on science of those albatrosses, after having seen already so many during our days at Falkland Islands.

As the Low Pressure System affecting us passes by, the wind eases down gradually during the morning, and after an early lunch we are all ready and eager to go ashore. We had an appointment with the people taking care of the farm located 15km away from Grave Cove, and we started our landing in coordination with their arrival to the beach. Falklands is famous for many things, and one of them is their adventurous so called “roads”. So it is not surprising that it takes for an experienced driver 45 minutes to cover this distance! They also care for around 3500 heads of sheep, and many of them were grazing around the meadows and hills all around.

We had all the group ashore when they arrived to join us for the afternoon and show us around. We set foot at the Grave Cove a bit before they actually arrived, and first had a few minutes to enjoy the beach, that receives its name from 5 o 6 sealers buried here during sealing era in the 18-hundreds. Then we all walked the kilometre that separate this point from the main penguin colony, at the Southern side of the island. There we met a long sandy beach calmly washed by turquoise coloured waters, in the Falkland fashion that we are slowly discovering during our landings.

The whole area is home of the largest Gentoo penguin rookery on Falklands, with numbers rising to about 7000 pairs. Something special happens at that beach, it took just a few minutes to realise that is the main access for countless gentoos to their nests ashore. Big groups of them were swimming and rushing off the sea at the beach. It was lovely to spend time just observing their evolutions in the water and suddenly whooshing ashore when a group decision seem to be taken. Care has to be taken not to block their way in and out of the water, and it took a while to put everybody on a proper spot to enjoy the show. Then the other characters on the play appears seemly out of nowhere, Sea lions start patrolling the shallows in search for a penguin evening meal.

But there are more things to be seen in the area, and some of us decided to follow Marylou (one of the French locals here that was joining and guiding us here) along the cliffs on the western side of the beach. With her we reached a charming Black-browed albatross colony, perched over the high rocky precipices cut by deep gullies, on a set up that can’t get more stunning. On the edge of the bluff also some King cormorants find good spots to rise their chicks.

Soon it was time to start heading back on board, while the weather started to worsen again. And indeed, just about dinner time wind gusts over 40kn sweep the area as the Europa lays at anchor withstanding the adverse conditions. We expect another windy night and a weather improvement in the morning, if forecast happens to be correct, the plan is to land in the morning in the nearby West Point Island.