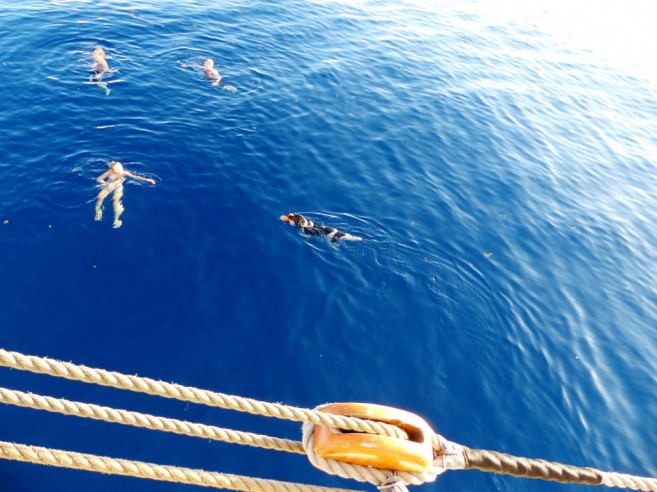 Today only six days at sea, but it feels like weeks. Since the start in Lunenburg we had already quite a few weather changes. Cold and windy, a shower at times and since we have reached the Gulfstream the temperatures have gone up from 16 to 29 degrees today. At first the wind was coming from the south, so we could make good progress to the east, doing 8 knots close hauled (the current gave us a hand), with the intention to pick up the right wind which will bring us to the south, but the whole weather system of the North Atlantic is confused, because of the hurricanes: Irma, Jose and Katia.
They are really nasty, with pressures of 914mb (Irma) and 933mb (Jose). Irma with sustained winds of 130 knots has left some ruins behind her. So far we haven't recieved much information about what happened on shore in the Caribbean, but Irma has hurt St Maarten badly so we heard. We keep an eye on them, sometimes they stop and will continue on a complete different route. For
us this morning the sea was like a mirror, nice time to go for a swim. The sun is hot and the water nice with a temperature of 26 degrees. Old and young were playing as if they were in the water for the first time.
A nice break for things to come.