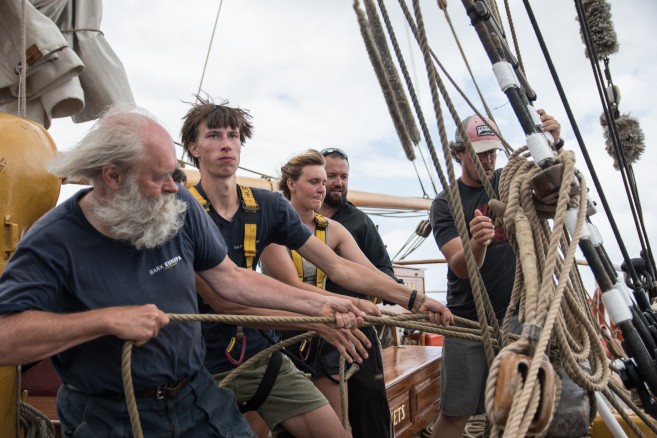 At the start of the voyage, all the crew assembled and introduced themselves. We had been idly speculating about who had what role, and it was time to confirm it our deductions.
Some people had been easier to place than others. The man we subsequently learned was called Hans was easy. The classic stereotype of an Old Salt – bushy white beard, experience written all
over his face, and a glint in his eye. Granted, he should really have been puffing on a pipe of the most noxious navy tobacco, and had a peg leg as a result of a long story involving a Cape Horn storm, a raft made from lashing together broken spars and barrels, and an epic struggle with just a broken boat hook against a great white shark as to who would get dinner that night (spoiler alert – the shark lost, but it was close). He’d clearly been sailing square-riggers when the Europa was still a lightship. Obviously the captain, and the rest of us were fortunate to be in the same port as him, never mind the same ship.

The medic (for we hoped there would be one on board) was harder to identify. Probably a younger doctor with a few years of experience but feeling a little constrained by the mundane ailments of the masses and seeking a couple of years of the adventure that they had missed out during years of study and career development. We jumped to stereotypes – if the medic was male then they would have short hair, so we quickly crossed most of the men out as either too hairy or too young. As for the females, Natalie and Sasha looked impossibly youthful. Maybe Nilla – no, she was one of the first to meet us as we went on board, and was custodian of the camera. Maybe Sarah? Yes, that seemed more likely.

Antarctic guide? Well that would be clearly someone who had led a couple of gnarly expeditions, hugely experienced, and keenly ecological at heart. Someone with a lifetime of activism, afraid of nothing – the kind of person who Shackleton himself would turn to for help and counsel in a precarious situation. A tall, grizzled, powerful individual with a ponytail seemed to fit the bill here.
Before we had a chance to finish the roster, the crew started speaking, and we found out how wrong we were. The captain was actually the doctor, the doctor was one of the guides, and the guide was in fact the captain.  The only thing we got right was that Nilla definitely not the doctor, but the odds of predicting that just by random guessing were well over 90%. But there was a medic on board, and we didn’t need to fear the call from the cockpit “Is there a doctor on-board?”.

Hans appears to be a career maritime medic, and did indeed start on tall ships (some taller than others) while the Europa was still a short ship with a different name. Fortunately his medical expertise is more modern than his sailing preferences. His lecture on Hypothermia was given an unconditional Pass with Distinction by our resident ICU consultant, even if his tendency to walk around barefoot when the rest of us are wondering if it possible to wear two pairs of Muck boots at once makes us wonder if he even knows what cold is.

The things he has seen over decades of floating practice tripped off his tongue. Numerous cases of hypothermia, trainees using the blades of sheath knives as footholds to get out of of bed, sailors using angle grinders to cook the flesh on their knees – the bizarre becomes the ordinary. Yet it was striking that he highlighted that the most challenging cases were psychiatric in nature.
His status as an Old Salt is beyond dispute, despite having two legs and turning out not to be the captain. Sail torn and conditions too rough to get the sewing machine on deck? No problem, for Hans was mending sails by hand in winter maelstroms long before most of the crew’s mothers were knitting them their first sweater, and he sat contentedly on the sloop deck, stitching away. Bill, one of our two resident vets went up to cast a keen professional eye over the sutures. All was well, he reported. Should an emergency appendectomy be required on board, the wound would be closed neatly and
evenly.