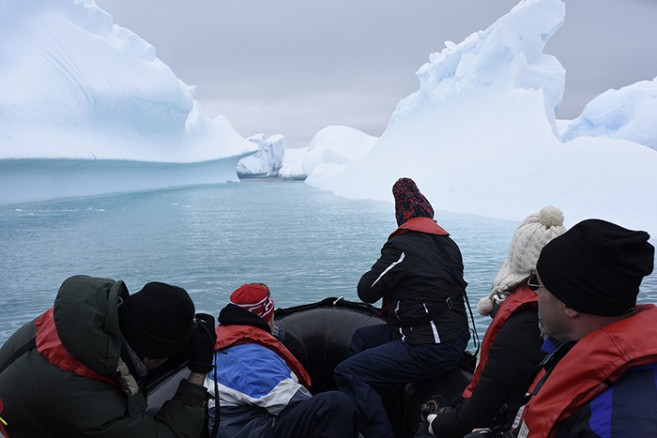 Some evenings it is almost impossible to go in and sit behind a computer
to write about the day. Days are long here, they are light, they usually
do not end. Whales. Ice. Up in the mast. Glacier. Brash ice. Icebergs.
Bergy bits. Red snow, green snow (algae) Growlers. Sea ice. Up in the
foremast. Up in the mainmast. Back on deck, back inside.

Try to sit and write about this morning – about our zodiac cruise
between the icebergs. Meltwater lines and turned over mountains of ice.
Icebergs looking for their balance in the swell. Solid grounded
icebergs. Three little boats looking for a way. Write about a place
called the Iceberg Graveyard - the passage between the larger Trinity
Island and the smaller Spert Island. Rocks and shallows – currents that
bring icebergs here to slowly melt away – or break up and continue on
with the endless clockwise current around the continent. About steep
cliffs and a snow petrel. About hot chocolate, chocolate with air and
chocolate with almonds – out there, between the icebergs, this morning.

Back out on deck – humpback whales, flukes, fins, blows, back up in the
mast, just one more photo. Back inside, try again, try to write about
the afternoon now, the Southern end of Trinity island. The landing on a
low lying rocky island, Mikkelsen Harbor, only one kilometer long, and
still partly covered by snow. A calm landing, sunny and warm, enough
space to be on our own for a bit. The silence and the sound of the
gentoo penguins. The chicks – so small compared to the ones in the South
Shetlands. Up there the snow has melted much earlier and breeding could
start straight away. Did you notice the Weddell seals vocalizing?
Snowball fights out on deck.

Did you have a look at the whalebones? The huge ones – I don´t use that
word often, huge, but these ones where, blue whales and fin whales,
brought on land to be flensed in the early 20th century. Go in and write
about the sun and the warmth – about the snow coming in at the end of
the landing and the fog surrounding us later.

Some evenings it is almost impossible to go in and write about the day.
This is such an evening. We are in Cierva Cove, between the ice, just
the ship and the ice and the glacier and the slowly disappearing light.
Tonight has to be outside.
Sarah