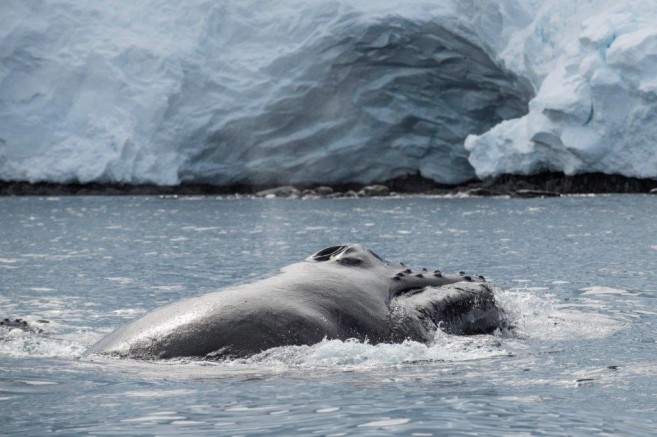 As we head South, the open waters of the Bransfield Strait become narrower, constrained by Brabant and Anvers islands, other islets and the Peninsulas itself. At this point it takes the name of Gerlache Strait.  Adrien de Gerlache was the leader of the 1898 Belgian Antarctic Expedition. At the northwestern entrance of the Gerlache Strait, lays Christiania
Island, just a few miles long but spectacular and wild on its every single inch. The amazing cliffs and rock formations, surrounded by shallows, and intersected by narrow channels and deep gullies, are crowned by glaciers and snow fields. With this rough appearance, it traps countless icebergs and bergy bits, making for a spectacular Zodiac cruise in the seldom occasions that the swell and wind conditions allow such an endeavor. With the Europa drifting on the uncharted shallow waters close to the Western shores of the island, where the abrupt topography above sea level reflects also underwater, one can only imagine the struggles endured by Gerlache on his expedition when they also visited this mountainous island.
Taking advantage of the great weather and calm seas of today, the harsh beauty of the island can better be explored from the small boats and sloop, so we did. Without knowing much about what lay ahead, at once we are immersed and staring in awe while driving amongst basaltic cliffs crisscrossed by dykes, narrow channels and gorges cut through the mighty rocky walls and their numerous hanging glaciers. This is a place to realize the roughness of the climate and sea conditions over the exposed areas between the Drake Passage and the Bransfield Strait, how beautiful can they be and how they have been carved by them. Humpback whales have been spotted as we were getting closer to Christiania in the early morning, as this area is known to be a good feeding ground for them. Even in one of the zodiac rides we were lucky enough to have a relatively close encounter with one of them. After this, our first impressive morning experiencing the truly Antarctic area, we keep on our way towards the much larger Trinity Island, located closer to the Antarctic Peninsula on the Eastern coasts of the Gerlache Strait. There we plan more cruising with our boats, once lunch is finished. During the last years that has become a traditional spot for the Europa to visit, but again the poorly chartered waters and it’s not so obvious orientation and location, contribute with the fact that not many other ships use this spot, although nowadays more of them are getting to know it. Not much more survey has been done here since it was first mapped by the Swedish Antarctic Expedition under Nordenskjöld between the years 1901-04. The channels between Trinity and Spert Islands give us another great playground for the zodiacs to drive in the narrows and constrictions between rocks and ice, under more basalt cliffs. Soon we are exploring the passages between rocky crags and the countless little bays between them, all filled up with icebergs of any kind, size and color. On them several Weddell Seal lay, and even a solitary young Leopard seal could be seen. Starting with paying a short visit to three Humpback whales feeding here, we proceed then to a wider channel that traps large drifting icebergs. From there the exciting ride builds up as the passages to navigate become narrower and more difficult for our drivers. At times
they are just wide enough to fit our boats between the ice and the rocks, then larger icebergs towering above us welcome us to more open waters. What an unforgettable first day of the year, spent doing the most spectacular cruising in Antarctica, under wonderful weather, warm temperature and calm seas.