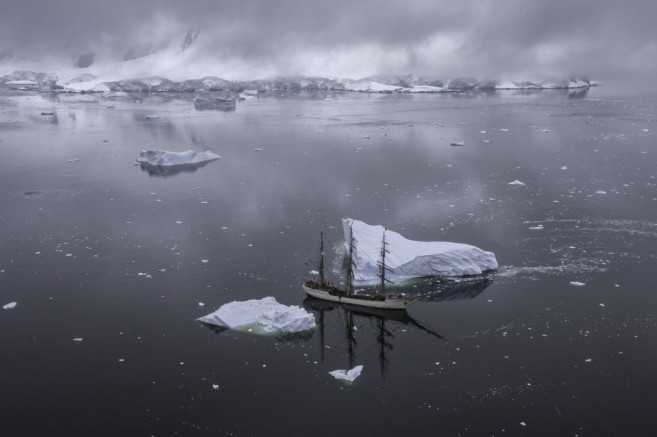 After crossing the Gerlache Strait under sail we ran into the shadow of Anvers and Brabant Islands and the wind died down. We tried to do some light wind sailing for a while, but eventually just before midnight we take all sails down, start furling and start the engine to get into the Drake Passage.

But in the early morning around 04:30h we start setting sail again on increasing SW-ly breeze, gradually rising to over 21kn. Europa gains speed again sailing on a 340º course with all her canvas set but Upper Staysails, Outer Jib Fore Top Mast Staysail, Spanker and Gaff Topsail. Sky clear up and despite the 2.2ºC temperature we enjoy the sunshine while pulling ropes on deck. By breakfast time we set the Outer Jib and the Spanker as well, making speed up to 6-7kn.

Like this we spend an enjoyable sailing morning as we get used again to the watch system and the movements of the ship in the open waters of a, so far, kind Drake Passage. But about lunch time things start to change with the wind conditions, becoming lighter and variable, still under sunny weather though, with the exception of short whiles when we cross a couple of small snow showers. Last Antarctic land to be seen during this trip appears at our starboard side, the spectacular Smith Island. With Foster Mount rising to 2105m above the sea level (this morning hiding behind low clouds) Smith Island represents the SW limit of the South Shetland Islands, that extend for 280mm from here to Elephant Island in a ENE direction. We keep sight of the imposing island until sundown, slowly leaving it behind us, when its mountain glaciated tops shine under the evening sun. On decreasing fickle winds, Europa slows down to 3kn, then for a short while wind picks up and she seems to come back to life increasing her speed to 6kn, just to decrease speed another time as the wind backs to WSW and dies again. On this changeable light wind situation, we decide to clew up all square sails and start the engine to keep a sufficient average speed for our crossing to Ushuaia.

During the afternoon we keep motor-sailing with the Staysails set, whilst the wind keeps playing around with us, now veering to NW-ly 10kn, until coffee time, when it becomes more N-ly, blowing under 12kn almost on our nose. All sails are stowed away and from then on we motor on a 335º course doing between 4 to 5kn of speed.

Back on the “sailing mode” its time to restart over with the Lecture Program. Today, during the morning Annukka talks on her work with Blue whales in Sri Lanka, while in the afternoon Jordi shares his experiences on “Working with Antarctic Wildlife”. He has been participating in several scientific projects in Patagonia and Antarctica, studying Albatrosses, Elephant seals and Humpback whales.

Out on deck, the bids of the Southern Atlantic start showing off around the ship. Following our days with the Antarctic wildlife, now its time to get back to the many species that glide over the open seas of the Drake Passage in search of food. Several Giant petrels have a look around the ship, nice little flocks of Cape petrels also pay us a visit while the small Wilson storm petrels also fly around us. Subantarctic breeding species like the Black browed albatrosses are also seen today, and even an elegant Light mantled albatross delight us for a while with its graceful flight.