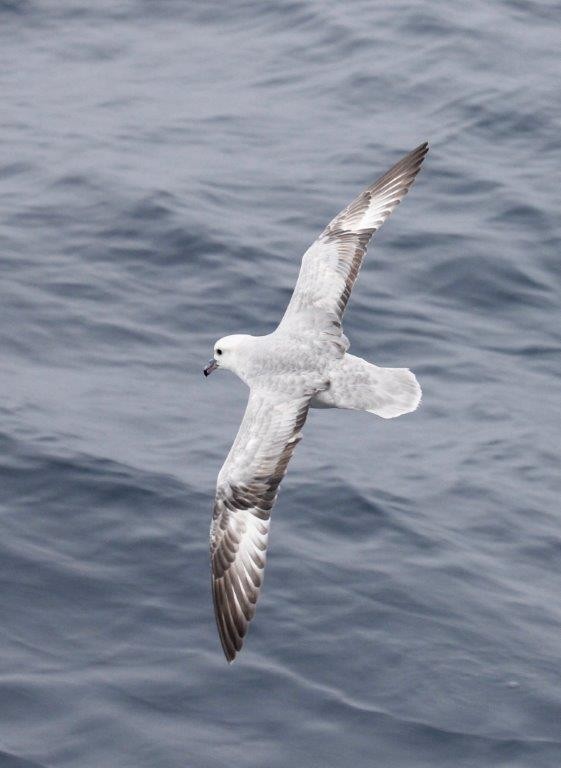 Europa leaves the relative sheltered waters off the north coast of Elephant Island early in the morning to sail around the Western corner of the island and head SW towards Penguin Island, the small volcano we plan to visit tomorrow located at the southern shores of the large King George Island.

Sun shines through a partially cloudy sky, glittering over the impressive glaciers and the high mountains that characterise this seemingly unapproachable island. Leaving Elephant behind, we slowly loose sight of the first land sighted in approximately a week at sea after leaving South Georgia. Now 120nm ahead of us lays our next destination, where if we are lucky we can go ashore and stretch our legs.

Due to the wind situation the way Captain chose to motorsail westwards first, quite a long way until clear all the islets, shallows and rocky coast of the Western Elephant island coast. In fact, under light winds from the SW, we kept a 300º course on Port tack, until after lunch. At that point it was time for Tacking the ship. With both engines running plus the Lower Top Sails, the three sails on the head rig and the Spanker at the Mizzen Mast, the steering was changed to 210º, a more straight course to our destination.  In the meantime the light wind keeps veering to the N, NW and W-ly later on. During the afternoon that lead to some sail adjustments, striking the squares but setting all Staysails plus setting the Gaff Top Sail. As the hours pass the good visibility we had during the journey becomes variable. Some times we could see solitary icebergs drifting 7nm away, other occasions the visibility was reduced to a couple of hundred meters. On that conditions care must be taken to avoid running into bergy bits or growler fields, detached from the lonely icebergs scattered here and there. Lookouts are asked to keep a sharp eye around, while permanent crew members are sent up the rig for a better view on the surroundings. Spending the afternoon on that way, soon is almost dinner time, when again land is spotted at the distance. Coming into view on the hazy atmosphere from behind the low clouds, Gibbs, O’Brien and Aspland islands let us have a glimpse at their inhospitable, heavy glaciated and steep appearance. This area was first roughly charted in 1820 by Bransfield Expedition and in 1821 by a Russian expedition under Bellingshausen, who gave the small archipelago the name “Three Brothers Islands”. Together with the closeby Elephant and Clarence islands, they are home for many seabirds, that pay us a visit during the afternoon. Countless Cape petrels fly around us, travelling together with Southern Fulmars and Antarctic prions. In between them the small but brave Wilson storm petrels fluttered over the swell in a sort of a dance in their search of nourishment. Some Black browed albatrosses also showed up, displaying their majestic gliding flight. Having their regular nesting sites far north, mostly in the subantarctic areas, they visit those higher latitudes and their rich waters looking for food as well.

Eventhough we keep motorsailing, and there is not enough wind to just use the sails, it is a welcoming feeling to do it over calm waters and low swell, after the last days dealing with much rougher conditions. That also allowed us to keep good speed overnight to arrive in the morning to our next destination, Penguin Island, where we plan to do our first steps in Antarctica.