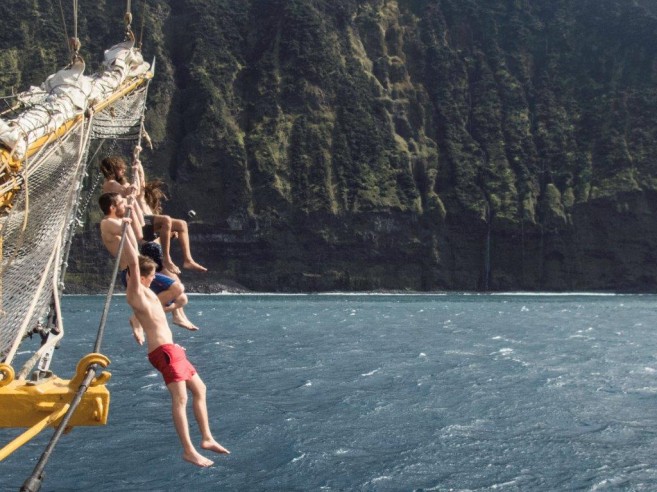 After a night holding our ground under two anchors, five shackles of chain down on each, and withstanding gusting blasts up to 40kn between periods of easing winds, in the morning Europa moves from the SW coast of Tristan da Cunha to the SE shores. After breakfast down goes the anchor again close to Trypot Bay, between Stoney Beach and Lyon Point.

Spectacular waterfalls furnish the large steep cliffs in front of us, with their waters falling from the volcano base plateau straight to the sea over the vegetated escarpments, making a stunning sight of the so called “Ridge where the goat jumped off”.

The new anchorage proved to be a better shelter for today, from the SW-ly swell and strong variable N-ly winds. Under those conditions was still not possible to land at the settlement of Edinburgh of the Seven Seas, located at the northwestern shores of the island.

But the sunny day and calmer conditions of this spot, made for a day at leisure, where several activities were going on. Documentaries were broadcasted in the Lounge, decks were crowded with sunbathing people, the daring ones even jumped from the rails or bow-sprit for a refreshing swim in the 17ºC waters, while others tried their luck with the fishing rods, after asking the locals for a fishing license. Being practically self-sufficient, the Tristan inhabitants get much of their income from fisheries, going out at sea to catch fish or lobster for themselves and issuing fishing licenses.

First Paul got a small fish, perfect to be used as bait for the next tries. After a couple of missing attempts to bring on board bigger ones, finally Wayne succeeded catching a large Yellow King Fish. Once on deck Captain Klaas took care killing and gutting it and in no time was brought down to the galley. From then on another King fish was caught, a good deal of fresh fish to enjoy on next meals.

Conditions were good enough to serve lunch on deck. At the same time looks like quite a big shark also decides to have its meal, and it could be seen circling around our stern probably attracted by the blood and guts thrown overboard after cleaning the catch of the day.

Despite the sunny and hot journey, the periods of relative calm are often broken by gusting strong winds, that made us drag from our anchors in a couple of occasions. For the whole day we can see the coastline battered by the breaking big swell and surge.

Until lunchtime, when the sun was high, winds starting to come down straight from land, passing over the high volcanic building and hitting us straight. Soon it was realised the need to look for a different anchor spot if we want to sit and wait a bit longer for the conditions to improve. Europa starts her way towards the Eastern side of Tristan da Cunha, where some protection from the swell and wind is expected. Finding shelter for the rest of the day is a pre-requisite to stay around and try again our last chance to land tomorrow.

Like this we spent until the afternoon coffee-time making our way towards the so called “Halfway Bach”, just north of “Pike’s House” and south of “Down where the minister landed his things”. Another spectacular area under the ever-present verdant steep cliffs that act as a fortification for the interior, stretching along all the island perimeter. Having a look at them through the binoculars it reveal numerous Yellow-nosed-albatrosses sitting on their nests, while many others fly close to us, to a point where at naked eye all their features are visible, including their conspicuous yellow stripe on their upper bill. Interestingly enough these species is endemic to Tristan da Cunha archipelago, nesting nowhere else in the world.

As soon as the anchor goes down at this relatively sheltered new spot the exciting activities for the afternoon started. Three bells rang and we gathered on deck where the Europa Pinrail Chase Competition was about to start. We were divided on our watches and lines were called by the crew. Fastest getting to the line called won points. The game went on with several other ropes called and handicaps to slow us down. Following the chase we got a Knot tying contest, where we had to be able to make some of the easiest and most commonly used knots on board. The afternoon entertainment ended up with the different watches setting the Dekzbabber while the judge of the contest timed the whole operation. By far the Red Watch swept away the rest of participants and won the tournament.

Luckily the wind and swell started easing, and by diner time we lay on gentle swell and calm conditions. Hoping for a last good night at anchor before trying once more to land and then start our way to Cape Town.

Lingering for the last day and a half around the island we could barely shelter from the strong winds that swept over the cliffs and its high volcano. But nevertheless we could have a glimpse at the raw beauty of this remote outpost of civilisation, its bountiful wildlife clinging to impressive cliffs and vertical slopes covered with vegetation, and its rich marine life.

All enjoyed this leisure day after the long sea stretch from South Georgia, even though the sea conditions were not favourable for a landing. The words “now it feels like holidays” were heard on deck, sharing a similar (but nevertheless incomparable) feeling that the old time sailors engaged in trade with the Americas in the mid 19th Century had when off-duty, if lucky, one day a week. A leisure day to keep their busy crews content and with renew disposition for a new week of hardships. It must have been a delightful sensation being in the open air with birds flying around, off the arduous ship duties and the strict rules they had in the vessels. A sailor’s liberty was but for a day, when they were not under anyone’s eye and could read, mend their torn clothes and do their washing, and if extremely fortunate, even get a boat ride to go ashore  for a few hours when laying at anchor on the trading posts.