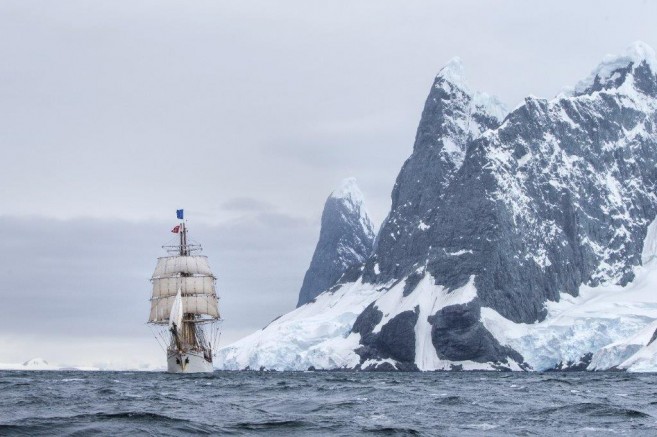 Expecting N-ly winds for tomorrow, in evening Europa steamed through the Lemaire Channel from our southernmost position of the trip in Collins Bay. When it is getting dark, the captain finds a precarious anchorage in a shallow plateau around Hazard Rock among the Puzzle Islands. Located in the Butler Passage, they offer excellent views over the entrance of the Lemaire Channel and represent a great departure point to sail again this picturesque passageway. As forecasted the wind has shifted and now blows towards the South giving us the chance to start setting sail and try a Southbound crossing of the Lemaire. Despite the cloudy morning, this time the visibility is good and during the morning keeps increasing and even the sun ends up shining over the mountains
around the narrow waterway. Soon a zodiac is ready to take us touring around the ship under sail in this amazing setting. Lemaire is about 7 mi in length and averaging about 1 mi wide, extending in a NE-SW direction from Splitwind Island and False Cape Renard to Roullin Point and Cape Cloos. Sailing South, it separates Booth Island at our Starboardside from the W coast of Graham Land.  Narrow as it is and usually filled up with ice, even though it was discovered by a German expedition under Dallmann in 1873-74, it was not traversed till December 1898 by the Belgium Antarctic Expedition
under Gerlache. Curiously enough, he named it for Charles Lemaire, Belgian explorer of the Congo. Right after heaving anchor about 07:00h we gather on deck to start setting some canvas.
Topsails, Top Gallants, Lower and middle Staysails, Spanker, Fore Top Mast Staysail and Inner jib are hoisted, while one of our zodiacs is launched. During the whole morning we will use it as a platform to follow the ship and take shifts photographing her sailing through the Lemaire Channel. Facing variable winds, weather and sea conditions, we all have the chance to take a tour around the Europa on this spectacular scenery, as she faces the icy waters of the passage. On some occasions the 15kn of NE-ly winds forecasted funnel into the channel reaching speeds over 30kn, making it difficult for the small boat to catch up with the ship as she happily sails steered by our captain. He also faces difficulties to lower the speed and turn around waiting for the zodiac to come alongside and change photographer groups. On other times the wind decreases just to pick up again afterwards. While some of us enjoy the ride on the rubber boat, the others are busy on deck following his sailhandling instructions. Sailing and photographing the old lady Europa along the impressive Lemaire Channel and its ice filled waters we spend a great morning. It is not always possible to sail in those treacherous Antarctic waters, and today we could even do it along one of its most famous passages in amazing light conditions and sometimes adventurous zodiac rides. However, the wind direction just allowed to sail southwards, when actually our next destination is located North of us. It is also time to start our way back, just another day left of our Antarctic program.

At the southern mouth of the Lemaire Channel we turn around, put the zodiac on deck and strike all our canvas. Many of us give a hand on deck and then aloft furling all sails while Europa faces headwinds while motoring her way north towards Goudier Island, where the famous Port Lockroy Historical site, museum and souvenir shop is located. There we plan to spend the night and if possible try our chances for a short late afternoon visit ashore. That will depend on our arrival time and when the large passenger ship “Le Boreal” finish their activities there. We have been busy trying to share the afternoon slot with them. After motorsailing our way under Lower Staysails and Fore Lower Topsail, we arrive to the area, at around 17:00h, Europa uses her traditional anchorage at the so called Back Bay, passing in front of the small Goudier Island and the small Port Lockroy facilities, towards the large Glacier front in its background.
After radio communication with the Base it is agreed that we can land for approximately an hour, after Anne, one of the girls working there boards the ship and gives us a good briefing, which introduces us to the history of Port Lockroy and the current state of affairs. Now considered an Antarctic Historical Site, the base was established in 1944 during World War II, as part of the secret “Operation Tabarin”, to observe wartime enemy activities around the Antarctic Peninsula. Later on, the Base was handed over to science, and was operated by the British Antarctic Survey (BAS). Nowadays, it is taken care of by the United Kingdom Antarctic Heritage Trust.

Port Lockroy has attracted those seeking a protected anchorage ever since Charcot discovered it in 1904, during his first French Antarctic expedition (Français, 1903-05).  He named it for Édouard Lockroy, a French politician who assisted Charcot in obtaining government backing for his expedition. Afterwards the bay was used by whalers, and as many as 40 of their vessels could fit here during the summer season. Big rusty mooring chains, a few scattered whalebones and a couple of old wooden waterboats, remain as silent witness of the busy whaling past of the area. There we can use the reduced walking space (half of the island is closed to visitors due to a research project on their impact on the Gentoo population and their breeding). Multitudes of Gentoo penguins are everywhere, making it difficult to believe that this location for the Base, back in 1944, was chosen because there were no penguins breeding there. Having just an hour to visit the buildings and reduced surroundings, many of us quickly visit the well assorted souvenir shop and the indoors at the former quarters of the Navy and research teams that operated here since the establishment of the Station.
Soon the zodiacs are ready to drive us back on board as the sunny afternoon becomes overcast once more. Europa looks gorgeous on her anchorage at the foot of the large Wienke Island glaciers. This much bigger island that hosts Goudier and Lockroy in one of its bays, is named after Karl Wiencke, a Norwegian sailor aboard the ship Belgica (1897-99). The story goes that while he was trying to clear the scuppers of loose coal in a storm, he was washed overboard. He miraculously grabbed a line and was dragging behind the ship but efforts to bring him back aboard failed and he was lost to the frozen seas. Gerlache chose this most dramatic mountainous and glaciated island to honor his name. All the personnel of the Base is invited on board to join our diner and share the evening with us, always a good choice for them to get off the Station, meet people and taste the cuisine of the numerous ships visiting the area, besides having the opportunity to have a shower and a change on their daily routine.