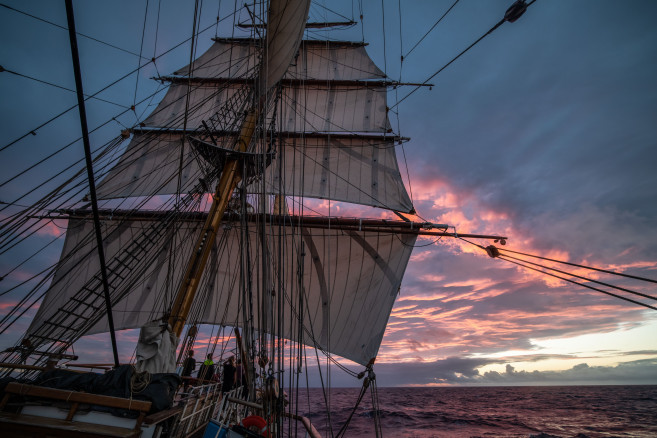 It's a beautiful night and a bit of a waste to be typing away downstairs in the tiny radioroom, surrounded by screens, buttons and antennas, so I'll keep it short. We are flying along with an Easterly breeze and all sails up, doing seven or eight knots in the right direction. The sea is smooth, the point of sail comfortable, a gentle roll more than any annoying heeling. On Starboard side, the full moon is slowly sinking, its pale yellow light reflecting on the sea and turning the sky almost purple. On the other side, the first hints of twilight are creeping over the Eastern horizon, a few strokes of rose madder through deep yellow interrupted by light fluffs of clouds.

We have less than a 1000 miles to go to Puerto Madryn. Brazil is disappearing from the chart, making room for Uruguay and the South. Instead of weather forecasts for the trade winds and equator, we look South now towards Highs and Lows coming across the continent. We have not quite yet reached the stage of counting down, but keep our spirits high with all sorts of entertainments: from our Europa own flea-market
with interesting trades such as hugs for cookies or a shoulder massage for a couple of precious gummi sharks, to murdering fellow watch mates with carrots and charts, to launching eggs from the first platform in intriguing flying devices, some more technically advanced (and egg-safe) than others.

Almost unnoticed the days and nights are turning colder. After living in only the lightest of t-shirts and shorts for what feels forever, hiding in the shade, we suddenly find ourselves putting on long pants and even shoes. The sunny spots become the sought after, the long sleeves are getting company from cozy sweaters. I even spotted the occasional beanie out on deck. The times where it seemed too warm to sleep are far away. It is spring, that's true, but also we are already more than twice as far South than we were North when we set sail in Tenerife. The water, too, has changed. It gradually went from deep sea blue to greenish 'Montevideo water' as it is known by the crew.  Instead of a couple of kilometeres, we have less than a 100 metres under the keel.

Here, the warm Brazil current and the cold Falkland current meet and stir up plenty of food. Yesterday the water temperature reached a new low of 15.4 degrees. Quite a difference from our last swim stop and the 27 degrees there! The cool water might not be appreciated by potential human swimmers. Our remaining vegetables however are a lot happier in their storage, which means the galley team is, too. And non-human swimmers seem to absolutely love it! As we are making our way across Mar de la Plata, we are constantly accompanied not only by albatross, petrels and terns, but also plenty of whales and dolphins. The odd turtle paddles by, head up high above the water, looking out. Today we had a little seal, goggling us with big eyes, and us, fourty-ish -fold, goggling back.

At the moment we are back in the Brazil flow, with 17 degrees of water temperature on the thermometer and the current setting us Southeast. Against our own heading of Southwest, which, with now very little wind, leaves us with the impressive speed of 1,5 knots! Luckily, we had those days of flying along, and can still peacefully continue under wind power only instead of switching over to the dreaded engine.  As usual, the forecast is not anything like reality. So we will see. We take what we get, and make do. There, we are speeding up 2.5 knots!

It's those small things that make us happy.