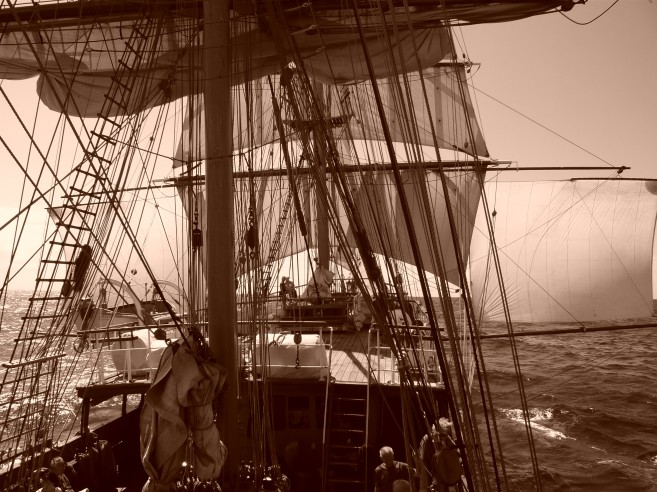 After more than 30 years ashore I have been re-acquainted with life on the high seas. My first time was as a deck officer in the Dutch merchant navy during the 70’s and early 80’s. This time it is on board the tall ship’ Bark Europa’ on our way to Cape Horn.

Europa’s voyage started in September in Hoorn, The Netherlands, to commemorate the discovery of Cape Horn by Dutch sailors 400 years ago. I joined the ship in Salvador, Brazil, and we hope to sail around the Horn in the next few weeks from East to West weather permitting. My wife and children were a bit apprehensive about me undertaking this voyage, but my three year old grandson asked if he could come with me! I had forgotten the tranquillity of being on the high seas with just the wind, waves and the sky forever changing. From light winds to blowing a gale, calm seas to massive waves, the deep blue colour of the sea and the intensity of the stars at night. No cell phones that beep at you, no Twitter Feed ,no LinkedIn, Facebook or other electronic distractions, just the occasional email to or from home. Bliss!

I was lucky yesterday morning whilst on look-out duty to spot a small whale with her calf calmly gliding through the water just a few meters from the ship side. Whales are currently migrating along the Brazilian coast from the North, where they have been calving, to their feeding grounds near Antarctica. Hopefully we will see a lot more of them. Life at sea is not all beer and skittles, especially for the thousands of professional sailors plying their trade across the oceans and who can be absent from their families many months at a time. However is has its charm especially on a beautiful sailing ship such as the Europa. Anyway have to go now, time to scrub the deck before the day watch commences!