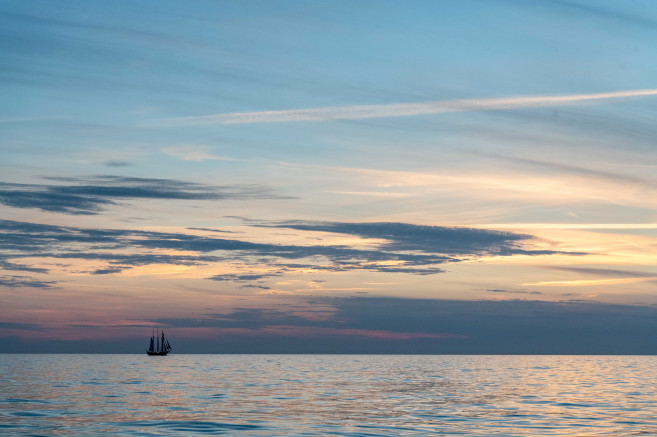 It has been three days since we left port to the cheers and loud applause of the thousands of people who gathered in Harlingen to watch the fleet of tall ships set sail for Antwerp. After some first class steering we managed to leave Harlingen’s inner harbour passing the Grossherzogin Elizabeth with barely a metre to spare. Leaving one very relieved German captain in her wake Europa was around the pier under full sail within a couple of minutes. Her new crew, most of whom had only met the evening before managed to pull off the amazing performance the old lady has come to be known for.

As we traversed the Wadden Sea under sail we were passed by the rest of the fleet motoring by. As they passed us by they were time and again met with the near ear shattering sound of Europa’s horn. This quickly led to the comic sight of her entire crew collectively plugging their ears after the first note waiting for the astonished reactions from the other ships. By sunset we were out on the North Sea and the subsequent morning started with my first watch at 4 o’clock. The silhouettes of the Dar and Oosterschelde I saw in the dying light of the previous day had disappeared across the horizon.

After my first trip from Frederikstad to Amsterdam three years ago it felt oddly familiar standing at the helm again, even after all this time. After finishing my shift and getting some extra sleep I woke up again late in the morning to the sight of another tallship on the horizon several miles of our port bow. Her green sails betrayed her as the Alexander von Humboldt. The rest of the day consisted largely of further familiarisation with the ship as we steadily moved further west parting ways with the German barque.

On board we heard stories of heat records being broken on land but to our relief we enjoyed a cool sea breeze throughout the day. As the sun eventually started to set and night fell I found myself in the deckhouse awaiting the start of my new watch at 12 o’clock. With about half a dozen people we were crowded around a chessboard that seemed to be in service 24/7. When we relieved the previous watch at midnight I was met by a beautiful clear starry sky, something quite unknown to a cityboy like me.

As I stood at the helm a crewmate pointed out a set of green lights several miles aft of us. What my partner at the helm jokingly referred to as a floating Christmas tree appeared to be the Alexander von Humboldt again who we overtook during the evening.

The following day was marked by nice sunny weather and amazing sailing. With a steady 8,5 knots during the afternoon the white cliffs of the English coast appeared to starboard. As we closed on a fleet of huge containerships awaiting entrance to Harwich several crewmembers played a game explaining the great forms that appeared on the horizon. The most hilariously ridiculous explanations got floated around, each met with a burst of uncontrollable laughter. From the rooftops of Atlantis to the tops of skyscrapers of a submerged London and the hanging gardens of Babylon which somehow were transported through space and time to the south coast of England. Eventually we settled on UHO’s (unidentified hovering objects), due to the white mist that distantly appeared near the bottom of the hulls of the huge vessels. And yes, we are all adults.

After yet another amazing meal prepared by the kitchen crew our captain Janke updated us on our movements and the next course of action. After a beautiful day of sailing we continued our course for Antwerp, the long way around. As I sat here in the darkening hours of the day in the ship’s century old looking library the romantic in me can’t help but imagine himself an explorer of old noting down his latest actions.