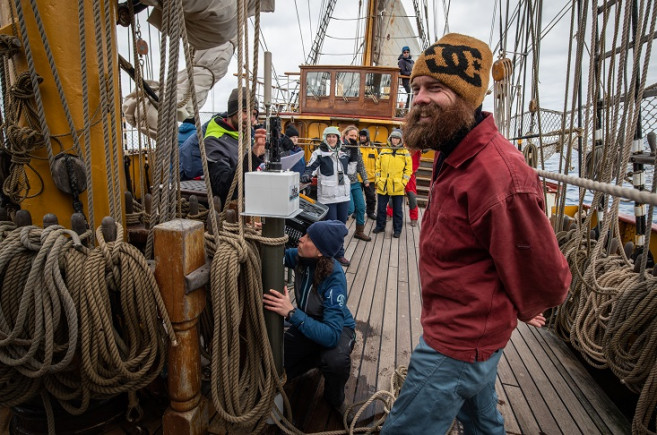 The day breaks bending-on a sail far out the jib boom. Soon the powerful Outer Jib, recently hand-sewed and readied again, catches the light winds. Elegantly soaring on them, a bird with a name immersed in mystery, Wandering albatross, pass by. Its large wings spread on an elegant soaring flight.

Gorgeous Europa, Phoenician princess who in the ancient Greek mythology rode over the seas riding the God of the skies and the thunder, king over the Mount Olympus deities, Zeus transformed onto a bull. She embellish the bow of the ship as her figurehead. With us, she still wanders nowadays over the oceans, still atop the mighty white bull and under a couple of dozen sails.

Today, most of Europa’s sails spread, she rolls over the long swells and following breeze of the Scotia Arch sea. A voyager, an old Lady made out of steel, wood and canvas, who endlessly carries crews and explorers across different oceans and to remote and well known destinations alike.

Today, on her wanderings, she just entered South Georgia Maritime Zone using the power of the wind. An island set apart from the modern world, consecrated to the Antarctic and Subantarctic Wildlife, history and research.

The ship’s complement has gone through lectures and briefings, has prepared to set foot at the isolated island, has cleaned and vacuumed their equipment and items to bring ashore in an effort to avoid the introduction of any alien biological material to this delicate ecosystem laying off the beaten track. There’s no place in the island for such things as wandering seeds or dirt travelling from distant areas on the visitor’s clothes, footwear, backpacks, photographic equipment or walking poles.

A rare community of interacting organisms that had suffered in the past the actions of sealers and whalers, animal and plant invasive species introductions and the devastating effect of the rats over the bird populations. Great achievement has been the recent eradication of Norwegian reindeers and rats, now South Georgia its on the way of recovering even more its bountiful nature. There, we are the aliens.