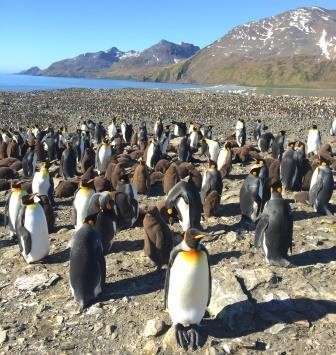 "No one of us whose privilege it was to be there will forget our first sight of the penguins... They are extraordinarily like children, these little people of the Antarctic world, either like children or like old men, full of their own importance and late for dinner, in their black tail-coats and white shirt-fronts - and rather portly withal."

- Apsley Cherry-Garrard, The Worst Journey in the World, 1922

The famous explorer's description remains bang on, almost 100 years later.  Though Apsley was speaking mainly of Adelies, of all the penguin species we have seen, surely the King must rank as my favourite.  Elegant, inquisitive, and unafraid - with their plump brown chicks that look so entirely different, and a trumpeting call that will ring in my ears long after we have left South Georgia. To see the vast colonies up close and in their full glory at Salisbury Plain and St. Andrew's Bay was a rare privilege indeed.

The whole island is beyond words. Such an abundance of life, such majestic snow-capped peaks, such infinite vistas.  Credit to Captain Cook and "Boss" Shackleton for putting it firmly on the map.  As we prepare to leave on the back of favourable Westerlies (and set the ship's clocks ahead another hour for the second time zone change of the voyage), we do so knowing how fortunate we have been, to fit so much into the memory over 8 unforgettable days here.

Now onward to Tristan de Cunha, the remotest island in the world!