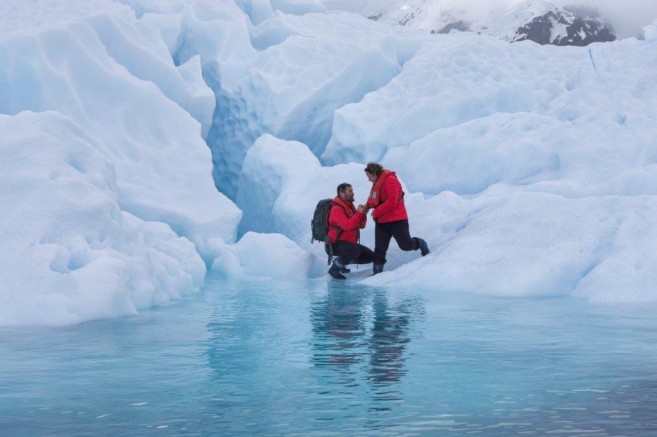 Icebergs drifting towards our anchorage welcomed us to the new day, under a stunning sunrise on the unique spot South of Cuverville Island. Colorful skies over the mountains and spectacular views of the Errera Channel, Rongé Island, the Antarctic coasts and the Gerlache Strait made for a fantastic photographic early morning. The shallow waters of the channel that separates Cuverville and Rongé Islands, at the entrance of which we lay at anchor, don’t let the largest icebergs drift towards us, but medium and small sized ones can overcome the reefs around and with the change of tides and the current increasing we find ourselves having to deal with them by breakfast time. Nevertheless our mate and captain manage to stand Europa’s ground and soon more open waters surround us. Shortly after breakfast we board the zodiacs and land at Cuverville where we plan to spend the morning. The island, as many other features in this area was discovered by Gerlache’s Belgian Antarctic expedition (1897-99), and named by Charcot for a vice-admiral in the French Navy. The boats steer through shallows and grounded icebergs before dropping us off on the rocky NE coast of the island which is surrounded by steep and nearly vertical walls except on part of its Northern shores. Gentle slopes come down from the glaciated island’s top to a wide beach that extends 200 meters from the shore to the base of the cliffs. There, the large and rounded bare rock areas provide good nesting sites for Gentoo penguins. Even though this is one of the largest rookeries of this species, the Gentoos are used to nesting in smaller colonies than other penguins. In Cuverville, several thousands of them find their home during the breeding season. Ashore we have the morning to walk around the coastline enjoying the penguin colony and the spectacular surroundings. Countless chicks walk all over, while the adults look busy feeding them, afterwards disappearing in the sea again, to look for more nourishment for their hungry offspring. Some of them already look for shelter behind rocks to start molting. Amongst the penguins, several whale bones lay scattered along the beach, they remain as witness of the old whaling times in Antarctica. The ones between us that were up for a bit of hiking could climb up half way to the top of the island. First along snow fields and rocky outcrops and then on the small glacier that covers the islands top. As we walk, we have to strip several layers of our clothing on this warm and windless morning.

From half way up we enjoy a magnificent view of the mountainous surroundings, with the Europa anchored way below us. The Gerlache Strait, Errera channel, the Antarctic mainland, Rongé, Brabant and Anvers Islands disclose their beauty under the partially covered skies, where clouds keep fighting the sun to bring shadows over the landscape. Much faster and fun was the way down, tobogganing effortless down the slopes that we arduously climbed just a few minutes ago. After making our way down to the beach, zodiacs were ready to bring us back on board, making a short detour on our way to cruise around some spectacular icebergs and for the lucky ones even getting closer to a couple of resting Humpback whales.
Then about three hours of motoring lead us to Paradise Harbour, where we planned the afternoon activities. As we get there we were welcomed by a couple of Minke whale groups swimming and diving amongst huge icebergs and bergy bits.

And soon, at the base of a rocky headland of mainland Antarctica, home for the Argentinean Station “Almirante Brown”, we drop our boats for a cruise in combination with a short landing at the Base itself to climb to a beautiful viewpoint over the whole Paradise bay. At the Stations small jetty we are welcomed by Astrid, the only girl amongst 8 men, who are here since January and will take care of the Argentinean facilities until mid-March. She explains that Brown station was built in April 1951. In the beginning it was used mainly as summer station, but after 1965 it was settled permanently until 12 April 1984, when it was destroyed by fire. The Base has seen some maintenance in recent years, with a crew working here during the summer.
Following a well-marked track over a snow slope, we head to the top of the basaltic 80m high cliff named Shag Crag, and as will become obvious when we cruise with the zodiacs below, it is named after the large Antarctic shag colony nesting on its SW face. From the top we can get outstanding views of the whole Paradise Bay. On the way to the zodiacs, again we have a good chance for sliding down before continuing with a picturesque cruise towards the ship, now repositioned next to the impressive Skontorp Cove glacier front. Driving around countless ice floes and icebergs we encounter several Crabeater seals having a rest on them. With them we got all the most common species of seals that can be found in these waters.

At a point during the cruise one of the boats takes a bit of distance from the rest. There the photographer Frits and his girlfriend Merel set foot ashore. After taking a few pictures, a remarkably romantic moment takes place. Frits kneels down, takes a beautiful diamond ring from his pocket and a wedding engagement takes place on this unbelievably beautiful setting. Luckily he receives a “yes” for an answer, in front of the astonished eyes of the people cruising in the zodiac, as the whole procedure was clearly kept as a secret. Josiah and the rest of us immortalize the moment in videos and pictures for the happily soon to be married couple.
After this noteworthy moment, the cruise continues amongst the icebergs and more Crabeater seals snoozing on them are found. Other good ice floes crossed our way, good enough for the ones of us willing to step on, to spend a short while standing on them. Then we steer towards the Europa that now rests in front of the ice towers, impressive caves and overhanging seracs of the Skontorp Cove glacier front. There we start the zodiac cruise and landing for the second group, to offer the same imposing experience to everybody.
Afterwards, Europa spends part of the night drifting in Paradise Harbor, timing our departure for the sunrise to be at entrance to the coveted Lemaire Channel.