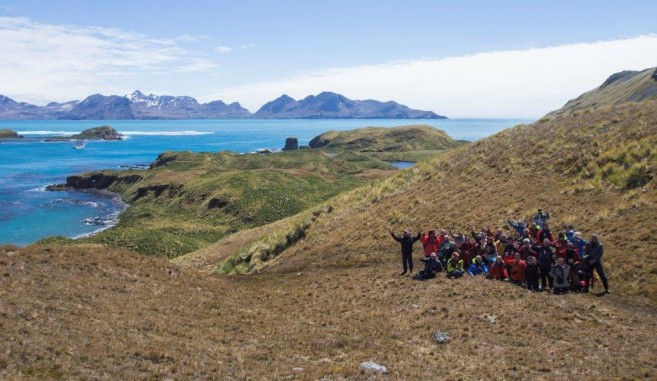 Again under two anchors we weather the elements in Husvik Bay overnight. Luckily the sea bottom offers quite good holding and we had no problems with the gusting strong winds. By the early morning it was time to hoist both chains and start our way to Maiviken Cove.

Fair winds allowed us again to sail almost all our way. Under Top Sails, Fore Top Mast Staysail, Inner Jib, Spanker, Middle and Lower Staysails we race our way to this little bay, tucked into the coastline of cliffs and scree slopes in Cumberland Bay. Once more the Europa rejoice a glorious sailing morning, while we make her happy with our efforts we get ourselves a thrill out of the variable strong winds making us brace, striking staysails, setting them again when necessary.

Visibility wasn’t good and the foggy environment adds a dramatic touch to our sailing endeavour. Out of nowhere the hazy skies open into a magnificent view as we take sails away and get into Maiviken.

The cove has just three small beaches at the foot of the impressive bluffs surrounding it, all set between Rocky and Mai Points with their upper parts covered by tussock grass. The first one to the North is called Tortula Cove, the next one is Burnet and the third one is called Poa Cove.

There we soon disembark. It is a very special occasion for one of our guests, Nigel, who met his son at the beach after almost a year not seeing each other. He is the  Doctor in King Edward Point, the research station located at Grytviken, and was going to sail our ship from here to Grytviken with other 7 people who live and work there.

Klaas and Jordi invited them on board a couple of days ago. They just came walking from Grytviken earlier, doing the same walk we plan to do but in the opposite direction. Representing a nice break on their daily routines they were all exultant. Soon all started to pull ropes and climb the rig very enthusiastically, playing the role of crewmembers for a couple of hours until reaching the station.

Nowadays Maiviken itself is used often by scientist from King Edward Point for research purposes, mostly surveying Fur seal population and Gentoo penguins nesting at Tortula Cove. But the area was well known already by early sealers. Next to the landingsite sits a sealers cave, where they used to be left to hunt and skin as many Fur seals as possible, being picked up a while afterwards by their ships. In the present times a wooden wall with a door protects the entrance, a recent addition to the sparse comfort of the early sealer’s life.

Under clearing up weather, we start our morning stroll over a well trodden path. Along Bore Valley we walk along a mountain lake where a small hut stands. It was built in 1974 and is kept in good conditions until nowadays. From there we climb to 205m of altitude to the so named Dead Man’s Cairn. From there is all downhill until reaching Grytviken facilities. Not visible during all the hike, they suddenly appear as we round the lower hills close to the coastline.

We arrived shortly before the Europa sails into the bay. Time that we spent taking our first shots of the artifacts and structures surrounding the landing site.

Soon we embark for lunch, while Klaas, Fosse and Jordi go through clearance and mandatory paperwork with the British authorities before start our afternoon landing.

While working on that, Sarah (person in charge of the Museum and head of the South Georgia Heritage Trust) together with one of her assistants, gave us an interesting talk about Habitat Restoration in South Georgia. We are all happy that the reindeer and mostly the rat eradication programmes seem to be greatly successful.

Then all was ready for us to land. Starting in the famous graveyard, we made our way to the Museum through the whole whaling station.

In the cemetery, amongst many other graves of sailors and whalers, lays Ernest Shackleton’s grave and also the recently moved Frank Wild’s ashes.

Shackleton died on January 5th 1922, at South Georgia, on his way south for his third Antarctic expedition..

His body was on its way to England when his widow requested to send him back for burial to where he be-longed: in the deep south. He was buried near Grytviken on the 5th March 1922.  On the other hand, Frank Wild was buried here in 2013 and honoured with a plaque. Now both are reunited again, the “Boss” and his right hand and First officer. Their resting places are in a preeminent location amongst 63 whaler’s and sailor’s graves.

We did a small traditional ceremony at the graveyard, including drinking and pouring Whiskey on Shackleton’s grave, using for that an excellent bottle offered by our fellow traveller Andreas.

The guided tour along the station started afterwards, ending at the Museum, Post office and well-assorted Shop. Either joining the tour or walking on our own, it was pretty impressive to walk around the well preserved remains, including giant rusted anchor chains, high pressure steam cylinders, buildings, hauled out workboats, beached whaling boats, chimneys, generators and engines.

Next to those rusty remnants, vestiges from past times, the white whaler’s church built in 1913, restored and well kept, stands against the landscape. Closeby, overlooking at the sea we find the Museum that hosts a reat display of all aspects of whaling, exploration, Falkland’s war and natural life of the island.

In the next building is exposed replica of the  “James Caird”, the open boat used by Worsley, Shackleton and four of their men to sail all the way from Elephant Island to South Georgia, in search of rescue for the rest of the expedition members.

Zodiacs picked us up to come back on board, there we are welcomed with a surprise barbecue party on deck! Some workers on King Edward Point, museum and post office, are also picked up to join, having great time on board, a few drinks and good food. We plan to spend the night at anchor, leaving in the morning early to Co