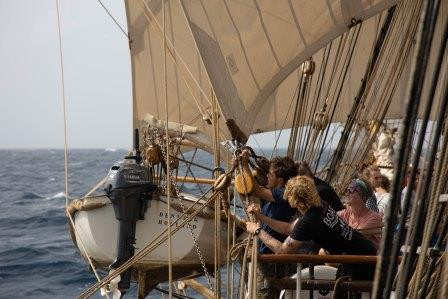 The last days have been all in the theme of making connections.
Firstly, connecting with each other. Next to all the sailing activities there has been plenty of time to talk and get to know one another. Someone even mentioned that all the stories shared between the voyagers are among his favourite moments.

Next to that, the practice of sailing shows us everything is connected. When you want to hoist a sail, it is not just about pulling lines: all lines are indirectly connected to other lines, that have to be attended at the same time. Sailing is working together closely, and learning how all the parts of the ship are interconnected and work together.

One of the shifts on board is "the Helm". At the helm, you steer the ship. As easy as it sounds, it has been a process for everyone to get the hang of it. The ship never moves in a straight line, but responds on the wind and the waves. Accordingly, it takes time to get to know the ship and estimate how to correct for the direction of the wind and waves.

Dirk, one of our voyagers, noted that sailing has tought him to look beyond the destination, beyond staring at the compass only. He has been on board now for a month and says he notices he looks around more to observe the waves and the wind. He feels more rooted, gaining more overview over the ship and all that the forces influencing it.

Disconnecting to the buzz of normal life has brought space for new things and thoughts. As we are all slowly settling in and calming down, we tend to have more space to let our environment really connect with us. And as we look around, it becomes visible how much life there is. Sometimes we feel like we are alone on the ocean, with no building or ship in sight. But
we have been visited by many animals varying from butterflies and birds hanging around on the ship for a day to a group of flying fish accidentally jumping on the ship in the middle of the night.

Many animals seem to be interested to see what is happening and come to take a closer look at the ship. This morning a group of orcas was spotted just a meter away from the railing, a unique and exciting sighting for everyone awake. One of the most magic moments was a night full of bioluminescence. As the bow of the ship cuts through the waves, it triggers bioluminescence which can still be seen as a long trail behind us. To top it off, a group of dolphins played in these bioluminescent
waves.

Life just seems to keep on giving, not just with wildlife, but also with great food, great conversations and even occasional self-made music. It is hard to imagine what else could be heading our way, but since we are all utterly content in the present, we don't really think about it. What we do think about, is our level of Spanish for when we do reach land again.

The first Spanish afternoon has already been organised and everybody was welcome: those who speak 3 words of Spanish and those who master the language of using hands and feet. I am sure we will have learned to sail by the end, but I will have to come back to you on the Spanish part.