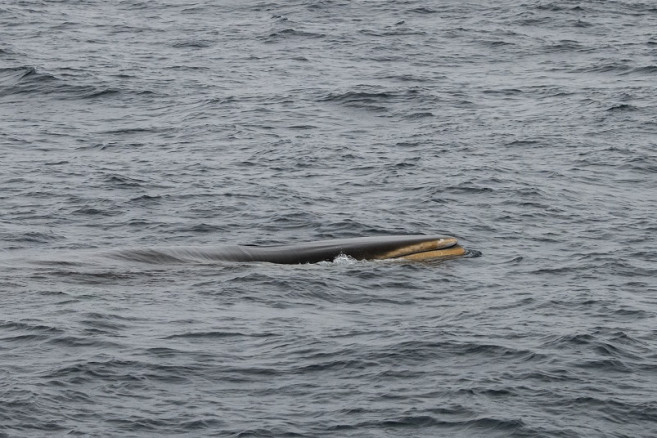 Paulet Island, our last visit ashore at the legendary Weddell Sea lies already far behind. Overnight, Europa had made her way northwards through the Antarctic Sound. First motoring with the wind blowing at her nose, then on easing conditions until finding herself on a practically windless and calm Bransfield Strait.

Under engine, she gradually works the long way towards the Island of the impenetrable ice and rock cliffs. Made famous by Shackleton in his failed Transantarctic Expedition, Elephant Island is our goal for tomorrow morning.

The Variable weather and visibility give us a chance though to have a look at Bridgeman Island, which we left just a handful of miles at out portside. A volcano that rises to 240 m above sea level, at the East of King George Island. Discovered by Bransfield, 22 Jan. 1820, he named it probably after Captain Charles Orlando Bridgeman, of the Royal Navy (1791-1860). Active since quite recently, three years later Capt. Weddell sailed next to its rocky slopes and saw smoke issuing with great violence through fissures in the rock. Nowadays is home for the ever-present Fur seals. Amongst its steep cliffs, Southern fulmars and Storm petrels nest. Many could be seen flying by the ship curious to have a look at who was sailing next to their homes.

During a journey like the one we are undertaking, a day of calm seas and slight head-breeze after a handful of busy days, packed with land excursions, hikes and exciting wildlife encounters, is welcomed for a good rest and for continuing with the talks and lecture program on board.

Although there’s no good chances for making good progress under sail, it is a good time for sail-training. Crew keep on going with their explanations about the rig, its sails and how and when to set and douse them. A lecture on Shackleton adventures stand out as relevant, when we are about to pass by one of the key areas of his Endurance odyssey. A journey that tried the ultimate goal in Antarctica of crossing the whole of the continent via the South Pole. Half of the way over unknown lands once they could hypothetically land at the Weddell Sea continental coast. The other half would have been following Scot’s tracks in the Ross Sea. But the year chose for this audacious enterprise, 1914, proved to be a heavy sea-ice year in the Weddell sea. So much that their ship, the Endurance, got badly stuck before reaching land. The real hardship and struggle for survival was about to start. 28 men lived on board until the ship sunk, then surviving on the drifting ice. A year and a half later they finally reach the remote and unwelcoming shores of Elephant Island.

After an epic open boat trip to South Georgia, on which 6 men sailed in seek of help and rescue, the 22 men left at the island were saved after 4 months. To such a renowned spot is where we head for tomorrow morning activity.

Getting closer already to the Southwest of Elephant Island by the evening, we are welcomed to the area by several of the Fin whales that use to spend this time of the year around here. We were lucky enough to catch the attention of one of them, which spent a good half hour inspecting our hull. Swimming from port to starboardside, showing its characteristic colour pattern with a lighter right side lower jaw, and a darker left one.

Right at our starboardside, Aspland, O’Brien and Gibbs Islands, despite reaching highs of several hundred meters are barely visible in the low clouds and dimming light at the end of the day. Then, already during the dark hours, Europa changes course and makes her way along the north coast of Elephant, passing through the marine channel called Sealers Passage. A couple of miles North of us we leave Seal Islands, a group of rocky islets that were home of large seal hunting undertakings already in the early 18 hundreds. Captain William Smith, who claimed the discovery of the South Shetlands, named them himself in 1820 because of the number of seals caught there.