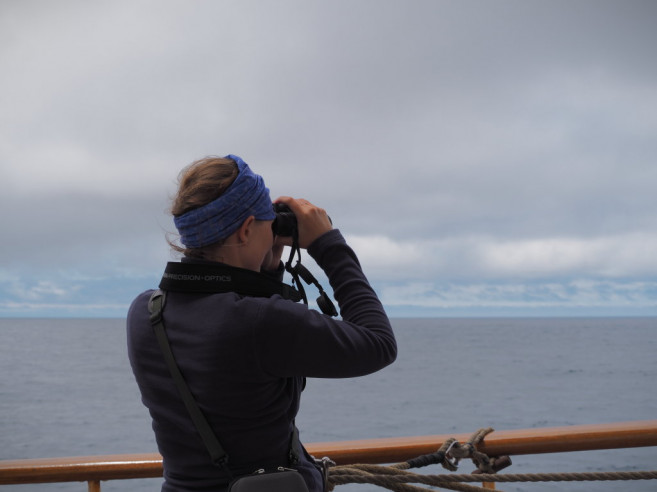 The clock marches on, and another dog watch signals the end of a very special birthday. It started sooner than I would normally be awake, but phosphorescent dolphin trails, a happy birthday song on lookout, and cards and presents from home more than made up for the early start.

Birthday whales later in the day were another treat as we hadn’t seen any for a few days. We tracked several fin whales and maybe one humpback pass us a few hundred metres away, on a mission south. Later on, I spent half an hour contemplating the horizon from part way up the main mast, and returned to deck in time for a gin and tonic before dinner.

Our day closed with delicious lamb and couscous, common dolphins dancing to starboard, Gadfly petrels swooping over the gentle waves, and apple tart with candles and three bells calling all hands to sing Happy Birthday.

Sadly no stars this watch, but we were spoiled with a spectacular sky-full complete with Milky Way a few days ago, so no complaints. The wind is not in our favour at the moment, but the stay sails give us a few extra knots of boost power to the engines. 6 knots and under 500 nmi to the English channel as the crow flies.

Addition: A few days later and we’re much closer to the entrance to the Channel, with fishing boats indicating we’ve left the abyssal plain and are back onto the continental shelf. A curious sailing boat changed course to pass to leeward before lunch, causing excitement on both sides. Gannets fly closely over the boat, but we haven’t seen dolpins for a couple of days now. The last pod of 50-plus was seen at the weekend, and carefully identified as striped dolphins. The Captain keeps careful watch on the weather to see if it will be possible to make a pitstop on the way to Harlingen. Meanwhile we’re looking forward to another interesting lecture from the engineer in a couple of hours.

Great read, thanks for posting…