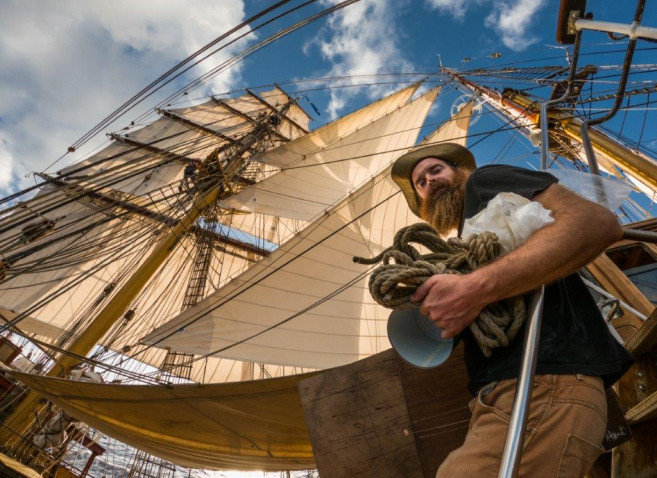 Upper Staysails, Flying Jib and Skysails, first sails to quickly douse and furl in case of a passing shower or squall. Rain and wind shifts both in direction and force, make for reducing canvas, probably bearing away a little too, all depending on the characteristics of every growing squall that cross our course, of which we encounter several during the day, evening and night hours.

And indeed, just at the dawn of the new day and around midnight, fast growing showers made for stow away those sails, that remained furled until the until the afternoon.

By then, the shifting winds became a bit steadier in a East by South fair breeze. Time for setting once more all our canvas, but not before doing a trawling for plastics with the Manta-trawl. The speed of the ship was still over the adequate one, what meant reducing even more sail. Soon after lunch, when all is ready for the sampling and before dropping the net over the side, a few hands available on deck drop the yards and pull on the clews and buntlines of Royals and Top Gallants, and pull down Lower and Middle Staysails too. A couple of hours of slow sailing were enough to collect the samples, and right afterwards Europa with her yards braced close-hauled, catches the wind again under her full canvas.

While some hands on deck are busy hoisting yards, pulling on sheets and halyards, the samples just collected are under careful examination. As a change from other trawls made during the trip, today all three of them showed presence of the so called nurdles. Small plastic pellets about 5 mm in length - but can vary all the way down to 20 µ in length (the same as a human hair)-. used as raw material in plastic production. Also called Mermaid tears, they are sometimes spilled in the environment during manufacturing and transportation. Lost out at sea, they often get a patina of micro-plankton, besides that, they look like fish eggs, meaning that they are easily eaten by a lot of fish and marine mammals.

These pellets contain toxic chemicals that then end up in the animals eating them. The toxins bioaccumulate and extends up through the food chain. Furthermore, aside their chemical toxic effects, they have physical effects too: not being digestible, the pellets themselves built up in the digestive system of the animal producing a false feeling of being full and fed.

Before all the samples are stowed away and being treated for further examination, full canvas fly over the decks.

It was in the evening when the steady wind picked up to over 20kn with some gusts related with passing low dark clouds. Harness on, crew stand-by until the Mate makes the call for dousing sails. Then it’s time to climb aloft to furl Upper staysails, Skysails and Flying Jib.

The last 24 hours of sailing on those steady winds and passing squalls has brought us 154nm closer to our destination, on a good course of 210º, finding ourselves following the Brazilian Coast at about 230nm from its beaches.

Good sailing combines with science and ship’s maintenance on yet another great day crossing the Atlantic Ocean.