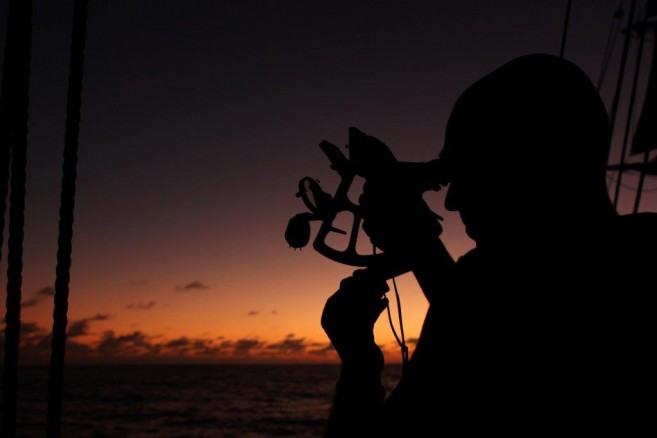 Last night on the midnight watch, I steered Europa by the position of
Arcturus in the mizzen shrouds.

I’ve been on board for two weeks now, and have seen dark skies, bright
gibbous moonlit skies, fog so thick we couldn’t see a thing.  Prior to
this voyage I had been in many dark sky areas on land, in fact I spent
my childhood in one, learning the stars and planets, but had never been
out of sight of land on the ocean.  Now it seems dreamlike.
We have watched as the fog dispersed after two days, first at the zenith
and a few stars appeared, then more and more until half the sky was
visible, and we knew with the rising sun the fog would finally be gone.
We have watched the moon skip across the sky, from the tiniest silver
curve , in the evening twilight ten days ago, to the fat misshapen orb
that lit up our graveyard watch last night, sinking into the orange haze
in the west before the sun rose.

And we’ve watched the planets.  Jupiter next to Spica in Virgo,
brilliant in the south, Saturn outshining Antares, between Scorpio and
Sagittarius.  As we’ve waited for the sunrise, Venus appears, glittering
her promise of another amazing day.  The word “planet” comes from the
Greek for “wanderer,” as the ancients noticed them moving amongst the
stars, and not keeping to a fixed position.  I am glad to have watched
three of them from the decks of Europa, Ocean Wanderer.

We can’t photograph the environment on deck on a midnight watch, we can
only try to remember it.  The gaze up into the rigging, the lie of the
yards and the motion of the sails, the song of the riggingas it moves in
the wind, under faint silver light and the quiet of the night watch.  At
dark of the moon, the stars steal the glory, hanging there in the
rigging like strings of fairy lights.  So many that it’s a challenge to
pick out our familiar constellations, turning around and around on the
heaving deck until we lose our balance.  Last night under the gibbous
moon it was easier, only the brightest and therefore most familiar stars
were visible.

And so Arcturus was in the mizzen shroud last night, as I steered our
course west-southwest  towards New Brunswick.  Just as we see the motion
of the bowsprit against the horizon, showing how the ship is moving up
into the wind or backing off, and we can anticipate heading changes
before they register on the heading indicator, so this bright familiar
star served me.  I found a point in the rigging that the star danced
around, and let it circle that point on the roll and pitch.  When it
moved off that circle, a small correction kept our heading.

The rotation of the earth means that on a four hour watch, the star
wheels around through sixty degrees of arc across the celestial sphere.
So about every ten minutes I needed to adjust which point in the rigging
the star would circle, as Bootes the herdsman dove toward the surface of
the sea.

This, of course, is not celestial navigation.  Navigation is far more
complex, involving tables and sightings and calculations, well beyond my
abilities as a trainee.  But the romance and poetry of steering a tall
ship by a star last night will seal the memories that no photograph
could capture.

Kathie, what a lovely description, and I feel I was there on board with you gazing at stars and planets!

Thank you for the delightful description!