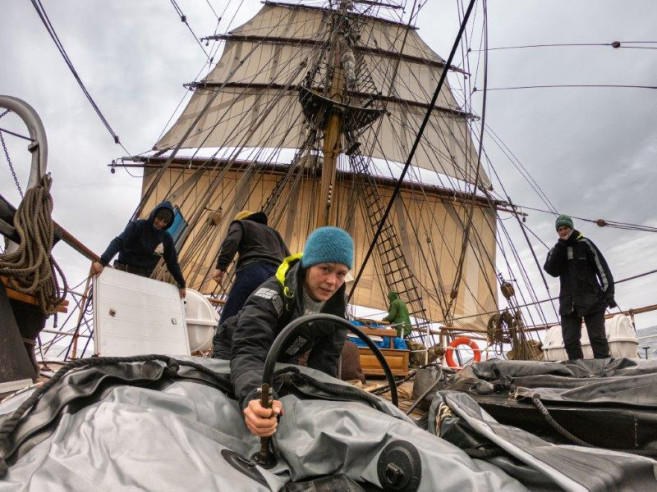 The great sailing circumstances we had last night lasted until about coffee time this morning. Before the conditions started to abate, the tail winds picked up to 35kn, making for shortening a bit of sail, clewing up and furling the Royals.

Along the rest of the morning and actually as a general tendency throughout the day, the Northerly winds decreased in force, first to 25kn before lunch, then easing down even more in the afternoon, together with the sea state, helping to lessen the ship’s rolling, all an all, for the great relieve to many.

So, from reducing canvas we started then to set more sail once more. Inner Jib, Aap, Outer Jib and Royals help to keep our good speed and exhilarating sailing towards Falklands. Full speed towards our first destination makes for starting to change our way more to a SE-ly direction. For that, hands are called on deck to pull the braces a point sharper to Starboard tack and the helm is instructed to steer on a 160º course. This heading will bring us closer to Falklands leaving the South American coasts at our Starboardside, in the direction of the planned landfalls that we maybe will reach already by tomorrow afternoon. A couple of options for that are in Captain’s and Guides’ heads. It all will depend on our progress from now on and the site availability. Most of the tourist sites available fort visits are privately owned. We must coordinate our landing activities with them and follow the different rules and requirements they may have in the different settlements. Besides this, we have to work on schedules that can appropriately fit together our visits with the other tourist vessels that are operating in the area during those days.

Everything seems to announce our proximity to land: new steering course, the crew putting together the Zodiacs (rubber boats equipped with outboard engines that will shuttle us ashore and back to ship once we start visiting the different islands in the Falkland archipelago), and the good speed we are keeping, eating away the few miles left until arrival. Actually from noon to noon we have sailed a good 196nm at an average speed of 8.2kn. Until now 930nm separate us from Montevideo and ahead of us just 187nm before dropping anchor, tomorrow afternoon if all goes well.

Substantial progress thanks to the fair winds and following seas, that brought us already in the afternoon all the way to the verge of the so called Furious 50ºS latitude. For us, reaching this famed austral latitudes has represented a combination of calms and storms, motoring at whiles, sailing the most we could, but all in a good atmosphere, having a good time starting to learn the maze of ship’s ropes and coming into understanding the spirit of a good sail. Nothing to do with the turmoil lived by the first Europeans arriving to the very same area 500 years ago. Magellan and his fleet were actually sailing following the Patagonian coasts, a few miles West of us. There is located the nowadays known as Gulf of San Jorge, a beautiful bay in the middle of the Patagonia with a dark passage in the history of Magellan voyage.

The 30th of March 1520, summer was ending in southern hemisphere and Magellan crew were already tired and suspicious. Juan de Cartagena, Captain of the ship San Antonio, was under arrest already since they had passed Tenerife. Him and most of the crew didn’t really know the goal and purpose of the whole expedition or the route to be followed, thing that brought misunderstandings and quarrels already quite early during the trip. Completely different from now in the Europa, the atmosphere in their fleet was quite tense and when they arrived to the bay of San Julian (Gulf of San Jorge), in the south of Patagonia and about 50º latitude, a mutiny started.

The night of the 1st of April, other two boats’ captains’ (Quesada and Mendoza), decided to liberate Juan de Cartagena but the mutiny failed and both were convicted to the death penalty. Juan de Cartagena and the priest of the San Antonio were sentenced to be marooned. The two were taken to a small nearby island and left to die. Other supporters of the mutiny, including Juan Sebastián Elcano (who later on Commanded the Victoria, only ship to finish the world circumnavigation and returned to Spain) were put in chains for much of the winter. Magellan decided to acquit them in order to have enough crew to run the boats. For over 4 months the ships remained in the bay, trying to survive the Patagonian winter, and during a winter surveying mission, one of them, the Santiago sank.

For them, the disruption due to winter conditions on trying to find a passage to the Pacific Ocean at those southern latitudes was a struggle for survival and to keep the chain of command. For the Europa today it was a good day passing over the famed 50ºS, on a moderate swell and fair winds, offering a comfortable sail at a good speed, tough the weather was foggy and the low clouds and overcast skies accompany us during the last hours.

When the afternoon watches started, the winds were still easing down to 16-18kn and the helming change a bit more to the SE, steering now on a 145º course, sailing under all canvas set but Flying jib and the Upper Staysails. later on the Vlieger was hoisted during the evening. Before dinner small groups of Peale’s dolphins were spotted, approaching the ship for short time. With their robust body of about 2m in length, they often bow ride ships, like some of them did today. Even being one of the most common dolphins around the whole Patagonia area, the Peale’s dolphin has a pretty restricted distribution, as can only be found in the waters near the shores of Southern South America and Falklands.

Furthermore we have to think on the forthcoming start of our planned landings. If all goes well we should begin with them tomorrow. Before that, we all need to know a set of rules to follow on land. Those guidelines relate with the Code of Conduct for the activities off the ship at Falklands, South Georgia and Antarctica. Our guides briefed us today about them and also on how we operate in the Europa during our visits ashore and in the zodiacs.