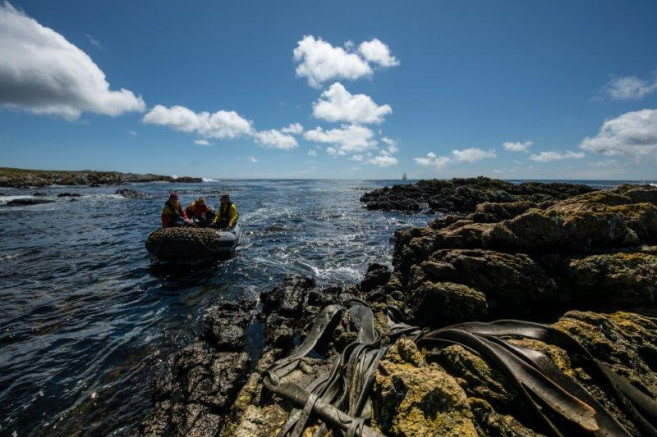 A good sailing night brought us by breakfast time close to the Southern shores of Steeple Jason. Overnight, Europa motored-sailed half of the 40nm from New Island and the rest were done under sail alone.

As we step out on deck with the first morning coffee, the spectacular island lay just a handful of miles in front of us, surrounded by thousands of the Black browed albatrosses that use this site for nesting.

But before we could decide if the rough conditions and breaking swells let us, to set foot in the island, it was necessary to have a good look all around seeking for a possible sheltered landing site.

Forecasted increasing SW-ly winds made for a quick decision to sail around the island and check its northern shores.

Like this, first we sail-by along the coast checking from deck the large Black browed albatross colony that spreads over the lower slopes. About 115.000 couples breed here. In the meantime, as we tried not to use the engine, many hands were also on deck sail handling. Gradually we took away the Square sails but the Topsails, and the Outer Jib was stowed away. We set Dekzwabber and brace accordingly as we were going through the passage between the two main islands in this corner, Steeple Jason and Grand Jason. Soon we steer the ship into the relatively narrow passage between them, where lots of current funnel, needing the help of both our engines to go through.

Once at the northern side of Steeple, we were still needing some time to reach the place where it looked like there might be a chance to find a corner between rocks were to land. Crew and guides were not very optimistic to start with as quite large swell was sweeping all the rocky shoreline. But nevertheless a zodiac was launched to scout the area. It took a while for our guides to make the decision of going ahead with the landing operations. Tugged between rocks and guarded by a Kelp forest bed, a relatively shelter place was found. But we are not the only ones that liked this little hideout, many inquisitive Caracaras check everything and everybody that lands, while a handful of Sea lions were already basking in the sun there, but after a short parliament with them they agreed to remain calm and allow for a landfall

Despite the scarce protection offered by shallows, rocks and kelp, still the breaking swell could be felt, making for a fairly complicated landing operation, that started by 10:00AM.

Uncharted waters and hidden shallows made for the ship to keep a bit of distance from the island, but soon all the ones that chose to go ashore were on land and ready to explore this amazing location.

Called Steeple Jason nowadays, the island was originally known as Sebaldines after the Dutch navigator Sebald de Weert who recorded sighting them in 1600. It was renamed in 1766 by captain John Macbride, sent by the British Admiralty to survey the Falklands.

It might also have been the first island of the Falklands sighted by the Europeans in the 16 century. As a difference with other Falkland enclaves, at the present times there is no actual farming here and actually is a WCS (Wildlife Conservation Society) Natural Reserve. And is most known for being home of the largest Black browed albatross nesting colony in the world.

It takes a bit of walking across grassy meadows to reach a vantage point over such immense colony, then a few metres through the lush tussock grass lead to the edge of the nesting area for the albatrosses. But first, walking along the first slopes from the landing area we found a couple of Gentoo penguin nesting groups. Here they use pebbles to build their nests and it was fun to spend a while watching them laying on their eggs, taking care of their recently hatched chicks or just enjoying their behaviour in the penguin society, with lots of steeling pebbles from one each other and coming and going along their highways back and forth the beach.

A few minutes later we were all half hidden amongst the large stools of tussock grass, standing just above of the countless Black albatross nests.

Steeple Jason offers one of the greatest nature spectacles on earth, and many of us got to appreciate the unique chance we got to be here. The bird colony is so vast that it cannot be completely seen from anywhere, and the several lookout points over the nesting grounds give just a partial view of the whole zone. Nevertheless the landscape, views and gigantic numbers of the beautiful albatrosses flying over heads and incubating their eggs next to each other is bewildering. For some enthusiastic people it was hard to put cameras away and, overwhelmed as we were, start our way back towards the landing spot. Southerly winds quickly picking up made for the decision to leave the area, hoping for a still relatively comfortable zodiac pick up, before the conditions would develop on larger swell and difficulties for all.

So we did, and when the last shuttle was returning to the ship the worsening swell and wind situation along the rocky coasts could be already felt. Soon after it was blowing hard up to 30kn, when luckily we were all back on board, and the Europa was starting her way under engine first, from the Northern shores of Steeple Jason to the NW-most tip-off the island and round it to sail afterwards on a SE-ly direction. Doing it this way, it involved bracing a couple of times until leaving the yards sharp on Starboard Tack getting all ready to set the Square sails up to Top Gallants, Inner and Outer Jibs, Aap and Spanker. Close Hauled we had an amazing sail for the rest of the afternoon, heeling to Port side. Now and then swell washed the Main deck making for rigging safety lines, and whoever wanted to step on deck had to wear harness. The good winds pulled us to West Point Island, reaching speeds of about 9kn, while thousands of albatrosses also catch the wind between us and the islands.

Hours passed by while our ship seemed to greatly enjoy doing what she does best, taking a fair strong wind and sail away, until dinner time when she entered the bay at West Point settlement, where we dropped all sails at the last moment and started the engine a few minutes before dropping anchor.

Now a furling session aloft was all what we needed to end up another fantastic day at Falklands.

Anyway to get alerts of these posts?