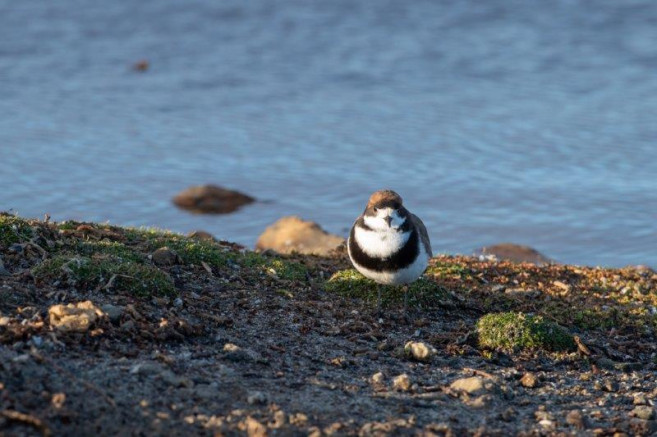 An overcast and misty morning found us preparing the ship for departure in the early morning. The sun and warmth from yesterday seem to be gone in one of those typical weather changes so common in the Falklands.

First one of our anchors is heaved, while waiting for departure clearance from the local authorities, then, just about 09:00h all was ready to start our way.

Right after breakfast some joined up the rig to unfurl Courses and Top Sails, and in the Jib Boom the Fore Top Mast Staysail is are readied. Not much afterwards we were already pulling the ropes to set this canvas, slowly leaving behind Port Stanley and another tourist ship, Plancius, that arrived earlier and they plan their visit to town today.

With the help of one engine and the breeze barely filling up our sails we make our way out through the narrows and shallows, to get into the open ocean along the East coast of Falklands. For that it was necessary to keep an eye on the course, often pulling the braces, now on Port Tack, now on Starboard tack, then square, to properly tackle our way off Stanley Harbour and Port William.

Once on the open waters the wind increased to 16-17kn now blowing from a SW-ly direction, straight on our nose. Time to clew up all the Squares that were set before, pull down the Downhaul of the Fore Top Mast Staysail and take away the Spanker. Hands were sent aloft afterwards to furl them all, as we don’t expect any wind change on the few miles left until arrival to Bertha’s Beach, where we plan an afternoon activity.

As we get closer to this spot, about 20kn of wind and swell run straight to the landing area at the long sandy beach of Bertha’s , situation that made for looking for a more sheltered way of doing the landfall. Fortunately, Bertha’s Beach long sand and dunes bar is open to the swells at its East coasts, but really protected from the elements on its western side, as it represents a sort of isthmus facing the quiet shallow waters of East Cove. Just one more issue had to be worked on, the protected bay is home for a British Military Base, and after several deliberations with them, we reached the agreement of dropping anchor and be able to spend the night at the so called Mare Harbour, just the large bay off East Cove. But entering the more sheltered waters and actually the back bay of Bertha’s Beach was not permitted for the ship. But luckily our zodiacs didn’t rise any suspicions and were allowed to drive the long distance to the car park that represents the starting point for the visits in the area. Covering the few more miles to this new anchorage meant that dinner was brought forward to 17:45h, then having all the time afterwards for the never ending boat shuttle and the visit ashore to that picturesque spot.

Once finally ashore, a short walk brought us to the spectacular long fine white sand beach that characterises the area. One of the first things to notice is the fantastic patterns created by shells, ripple marks and kelp holdfasts swept by strong winds along the shore. Actually the old bits and pieces of kelp and their holdfasts are spread all the way over the tide line, laying there as witness of high swells driving them up far from the wave breaking line.

Here we got a bit of free roaming time walking along the beach on a northerly direction, where about a mile and a half away the so called Swan Lake is located. Many reached this spot while others preferred to spend time at the beach itself. On the lake, the most impatient ones missed the appearance of a Black necked swans couple, swimming along with their offspring, paying tribute to the suggestive name of this pond. They are another of the majestic bird sights here, being rather large and showing their unmistakable white plumage contrasting with black head and neck, with a conspicuous red knob at the base of their grey bill. It is not a common bird in the Falklands, but a couple of hundreds of them use the lakes in the islands (favouring the Eastern coasts) for breeding in the Austral summer.

Down along the sandy coasts Ruddy headed geese rise their chicks too, sharing the space with numerous Banded plovers and Oystercatchers. Yet another interesting bird we met here were the flocks of White rump sandpipers. Despite being a Nearctic species, they are a relatively common visitor during the summer in Southern South America and Falklands, some of the populations withholding extremely long migratory patterns.

At the background of them, a handful of Gentoo penguins played in the surf just before the sun started to set. Time to turn back and take our way towards the landing site in the dimming warm light of the evening. Then again a few miles of a zodiac shuttle brought us on board, the last ones of us arriving already in the darkness.

By then, Captain and Mate had decided to reposition the ship a few miles South, closer to tomorrow’s planned landing site, at Bleaker Island. For about an hour we motor our way to the more sheltered anchorage from the W-ly and SW-ly winds that little bay offers between Lively Island and the main art Falkland island.