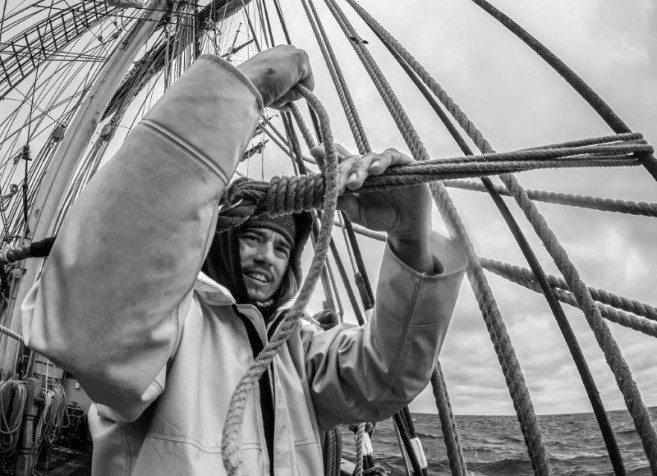 Bulls Point proved to be both, a fantastic spot to visit ashore, and a good anchorage to spend the night. Despite the low lands of its cape, it provides shelter from the ocean swell, while the Westerly winds sweep the flats, sand beaches and the bay itself. But good holding ground made for a safe harbour.

Still under those conditions, we wake up with the uncertainty of today’s events to come. Until coffee time, Captain, Mate and our guides discuss our next steps while checking the newly received wind forecast for the next days.

They all realise that our Falkland expedition is reaching its end and now our minds have to start thinking on the upcoming sea days once more. Between 300 to 400nm of the rough seas and powerful winds of the Furious Fifties latitudes stretch ahead of us.

Still with a few hours to take a final decision where to set course to, anchor is readied to be hoisted, engine is turned-on and setting Lower Staysails we get off the hook. First heading out of the protected bay around Bulls Point, soon we start experiencing the swell and stronger winds as we motor-sail on a Westerly course, on the direction of the southern part of West Falklands.

During the time between the morning coffee-break and lunch, Captain reach the conclusion that the best thing to do is set course already towards the Straits of Magellan. In a couple of days, and after a calmer period, Westerly and Southwesterly winds are forecasted to blow hard, just when the plans were to reach the mouth of the Magellan Straits, making difficult the navigation and progress. Leaving Falklands today, we may get ahead of the strongest blows and reach our destination in a more comfortable manner. Like that soon we will be re-taking once more the expedition that 500 years ago changed the view of the world and the trading routes, thanks to the first circumnavigation of the planet by Magellan-El Cano.

But first we need to gain a bit of distance from the islands that were home for our ship and our experiences, explorations and wildlife sightings for the last few days. Lucky as we were, we all got the chance to land in many of the island’s amazing sites, soak into the islanders live-style and welcoming personality while exploring the prolific Falklands wildlife.

On our way, the Southwesterly winds blow up to 30kn first, making the Europa heel while pitching on the confused swell. Later on and according to the weather previsions, the rolling became worse as the wind eased down considerably to less than 10kn but the short and high swell was still present.

Safety nets and lines are rigged, harnesses are made mandatory for duties on deck and we all heed the advice to take care of ourselves and our belongings on the rolling ship.

Under SW-ly winds and being quite close to land on our W-ly course, it was necessary to change tack a couple of times, to leave ample space to the shallows and kelp forests, manoeuvres conducted swiftly as we just keep sailing with Lower and Middle staysails plus the Spanker, with both our Jibs in the Bow Sprit.

Expecting a worsening in the seas and wind situation, during the afternoon the crew readied the ship for those upcoming conditions, tiding up decks, checking tension on braces and double sheeting the Staysails. And indeed later on during the night again SW-ly winds of over 30kn cross our path, making for reducing canvas. Dekzwabber and Outer Jibs are stowed away under the intermittent rain showers.

Thrilling..I am an old sailor from the Korean War. I follow the Europa daily, a friend is on board now toward Magellan. Thanks!!