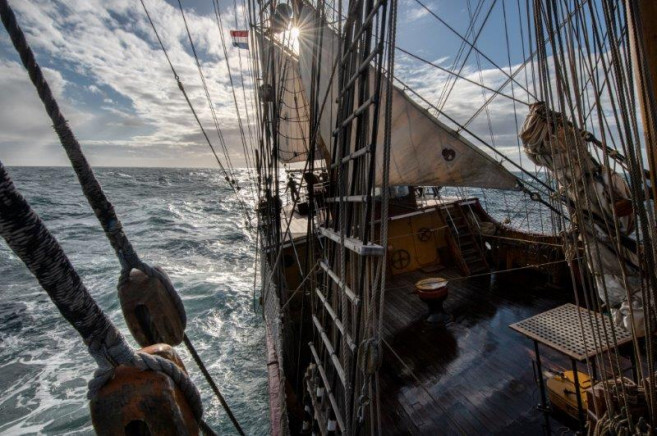 With the wind blowing from the SW with variable speed but up to 30kn , all through the night , sunrise and along the morning, Europa motor-sails under reduced canvas, just with some Staysails set, with their sheets doubled and tight on Port tack.

Although thanks to the stronger winds the ship feels more stable heeling to Starboard on her movements across the raging seas, the short and steep swell up to 4m high makes her pitch taking an occasional larger wave over the Fore deck.

Braving those conditions, the new day welcomed us with a beautiful sunrise over partially cloudy skies, while countless Giant petrels soar just above our heads while steering or doing lookouts. Mastering the gliding over the unsettled seas and enjoying the strong winds, they dare to fly-by at a scarce couple of metres from the Poop and the Sloop decks. Not showing such big confidence, flocks of Thin billed prions accompanied by a few Cape and Storm petrels, join their larger relatives around the ship.

But no doubt one of the birds that today stole the Giant petrels showing-off attempts were the majestic Royal and Wandering albatrosses. Now and then they appeared seemingly from nowhere. Lords of the oceans and winds on the southern high latitudes, they impress with their grand mastery of flight above tempestuous oceans and forceful winds, spreading their large wings to the wind, dwarfing the rest of birds around them.

For the rest of the day, the conditions where pretty similar, with winds varying from 18 to 30kn, but with a tendency to ease along the journey, that made for setting again a couple more sails. Outer Jib and Mizzen Top Staysail were added to the canvas already set, while we keep steering on a W-ly, WNW course.

The forecast for next hours looks like about the same, and eventually also for the rest of the days left until reaching the Chilean Patagonia coasts, meaning that we will have to motor-sail on similar fashion all the way to the Straits of Magellan.

Later on, with winds veering to more W-ly, steersman adjusts the course to keep the Staysails filled up, following the wind in a slightly more NW-ly direction.

Pitching and rolling, during the last 24 hours we have covered a distance of 124nm, and just about 131nm from when we heaved anchor at Bull Point, our last stop in Falkland Islands. Cabo Virgenes, located at the mouth of the Magellan Strait lays 220nm ahead of us in straight line, but for sure we will have to sail a bit longer, adjusting our course to the wind situation that we encounter on our way. Even so, with the prediction we have of strengthening winds up to 40 kn in about three days, the better option is to cross to Patagonia as fast as we can and find shelter there until we resume our way through the Straits.

Being just about 200nm from there, it is possible that now we are sailing in the very same waters that the ship San Antonio did about five centuries ago, after the desertion from Magellan fleet during the exploration of the newly discovered pass between the Atlantic and Pacific Oceans. While the ships were sent on scouting missions to find their way across the channels between mainland and Tierra del Fuego, the San Antonio failed to rejoin the fleet at the appointed date and location. After a successful mutiny, they reversed course and sailed back to Spain, when Alvaro de Mesquita (Magellan’s cousin and loyal to him) in charge of the ship was overpowered by the Pilot Estevao Gomes, who since long ago had feelings of animosity towards Magellan. Under his command the ship sailed off the Straits and into the South Atlantic before turning northwards. During that period many think that they may have been the firsts on spotting the Falkland archipelago at the distance.

And how those men were able to navigate the oceans of the world in those old times, was explained today by Maria. By then, it was not easy at all for them to position themselves, and she demonstrated with her own instruments how the astrolabe, the Jacob’s Cross Staff and the Kamal where used to take sights of the sun, like Magellan did 500 years ago.

On the other hand, and also continuing with the series of talks and lectures that our guides have prepared, Jordi gathered the ones interested on hearing about seals, their biology and the different species we have seen during our trip. Lucky enough we had some time to share with a group of Elephant seals during our last landing, that gave food to Jordi in explaining the research with those animals where he has been involved with.