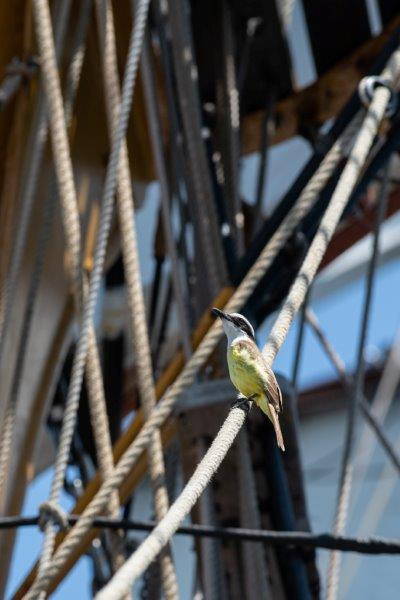 The new day welcomed us straight after midnight with a sudden weather change. From the dry and warm day, now a line of squalls passed by, announced by lighting low in the horizon.

It was not until just before getting into the squalls when they showed up in the radar. Rain and changing strong winds made for a midnight hectic start of the watch.

Over that sub-tropical latitudes, usually Squall-lines form as a line of thunderstorms in the warm air preceding the passage of a colder front, or also associated with the change of the wind directions from sea to land and vice-versa between the day and evenings. The different temperature and moist of carried by those different winds could also produce the rapid growth of convective located systems with rain and strong gusts. As such, they are all often accompanied by severe weather as downpour rain and strong surface winds, that quickly disappears as the squalls pass by.

After midnight, the winds suddenly increased from 10 to over 30kn, and turning almost all the way around the clock as the showers overtake us. That meant having all available hands on deck clueing up Square sails, striking Staysails and Jibs and climbing aloft to furl the highest sails. About an hour later the weather had calmed down after we left behind two squall-lines. The wind had became E-ly, blowing a good breeze of 15kn, Now it was time to brace around and start setting canvas once more.

First the Top Sails are sheeted-down, followed by Fore Course, Fore Top Mast Staysail and Inner Jib. Top Gallants were the next ones to be set not much later, together with the Lower Staysails.

Along the dark hours and until daybreak, more sailhandling was necessary as the wind backed again to NNW, slightly decreasing, until the new sunny morning found us motor-sailing at 6kn on a good 215º course. Dekzbabber and Desmond had been furled and the Fore Course hangs on its gear.

Motorsailing our way South, today by the morning coffee the surface water temperature readings show already a dropping of 4ºC since last evening, from 23 to 19ºC, together with a gradual change in its colour, from the sediment and organic matter laden waters from the Rio de la Plata, to the more oceanic ones. This goes accordingly with the theoretical water masses distribution in the area, where we are just entering under the effects of the Falkland Current, running northwards as a brach of the Antarctic Circumpolar Current. Keeping ourselves sailing at about 25nm from the Argentinean coast we try to escape its strongest flow over slightly more offshore waters, but we can experience its lower temperatures in comparison with the Brazilian current that usually are above 20ºC up to 27ºC. Sure during the next days we will experience some variations on the sea conditions and temperatures as it will take a few more miles of sailing south to escape the mixing zone between those two major current systems.

Of course all those facts were unknown by the early explorers of the area, but sure they experienced them on their discovery voyages, and reported the changes on the seas appearance, colours and depths, while prevailing winds and currents affected their way. Like Amerigo Vespucci, who in 1502 was the first to explore the Brazilian coast when a raging storm pushed him south even reaching Sub Antarctic latitudes, where he reported new lands. Eighteen years later, Ferdinand Magellan followed the coasts of South America and Patagonia, exploring every bay and river mouth, searching for a passage between the Pacific and Atlantic Oceans that would take him to the East Indies. This search drove his already tired and rebellious crew to think that he didn’t know his way and whereabouts and was erratically sailing. Some truth must have been in that as nobody had explored the coastal waters south of Rio de la Plata and all the maps ended there. One of his greatest bets, starting on 10th January 1520, was for trying his way upstream this major waterway, just to realise that again, that was not a passage between Oceans but just a huge river. Nevertheless, with this he achieved the first major exploration of Rio de la Plata. After turning around he headed once more to the ocean, sailing off the river muddy waters along the unknown coasts further south.

For us, today temperature drop and changing colours were happening in water, but the atmosphere was clear again, and the sun shone for the whole day, making for a hot day on deck and aloft. And during the morning under blue skies it was time for sailhandling. First, we braced sharp on Port Tack and set all our square sails, all the way up to Skysail, while on the Mizzen Mast the Gaff Top Sail was hoisted. Right afterwards the Sail Training instructions kept on going, today with a full explanation on deck about the Staysails, how they work and the sequence of lines to be pulled or released to proper set them.

Like this, enjoying another great morning at sea, it was time already for lunch, again served on deck taking advantage of the benign weather. And as usual, once we finished, the three bells rung announcing our daily meeting with the Captain and our Guides. There we were informed about our progress, wind forecast for the next hours and the plans for the following day. During the last 24 hours we have motor-sailed 126nm at a good average speed of 5.3kn, suitable for our timings and arrival plans to Falkland Islands, still at a distance of 1010nm.

From then on, the afternoon was spent sailhandling under variable light winds, until they started to blow on our nose. That was when we started to take sails away. Lower Staysails came down first, followed by the Square sails, while trying to keep going under Upper and Middle Staysails, Fore Top Mast Staysail and Inner Jib.

But later on, the headwinds made for striking all sails and just after an amazing sunset, the upper ones plus the head rig was furled.

Hopefully tomorrow fair winds for our intentions will blow.

Just like us, the many seabirds observed during the day seem to be awaiting stronger winds, spending the day sitting over the calm waters instead of spending the energy necessary for travelling while flapping their long wings. Petrels and Albatrosses take advantage of the surface winds for their long journeys and prefer to sit and wait for them in days like today.

And indeed some of them travel over large distances. The Atlantic Yellow nosed albatrosses seen today have their breeding grounds in the distant Tristan da Cunha archipelago and Gough Island, but they can disperse over the South Atlantic as far as 15º latitudes, sometimes seen in big groups around the Rio de la Plata mouth. Same nesting areas share the Great shearwaters, which many of them were seen today, together with the handful of Little shearwaters that we spotted. But this latter species is much more cosmopolitan and its distribution also includes almost all Southern parts of the Indian and Pacific Oceans, plus islands in the northern hemisphere like Canary Islands, Azores and Cape Verde.

Much more common in this area, White chinned petrels shared today’s calm waters with Black browed albatrosses, while several Magellanic penguins pop up at the surface amongst those other resting birds. Their reproductive areas lay further South, but on occasional long foraging trips, youngsters and non breeders can disperse over large distances along the South American coats.

Amongst all those seabirds, a lonely terrestrial tropical bird, a Great Kiskidee, decided to take a rest on board our ship, clinging from the rig for a while before resuming its way towards land.

In the afternoon also a small group of Dusky dolphins pay us quick a visit before we were gifted with a great sunset.

Dear Sailors on the EUROPA, Nice to read and see this LOGBOEK. As a special greeting to your Captain Janke Kingma I send this mail. I'm proud to know I was instructing her father more then 50 years ago to start with sailing and suppose her father learned her to rule the waves. So my best greetings from Frisia (Mildam) on your far trip to the Antarctic regio. Yes you can, Captain! Jenne de Haan - Mildam - Friesland.