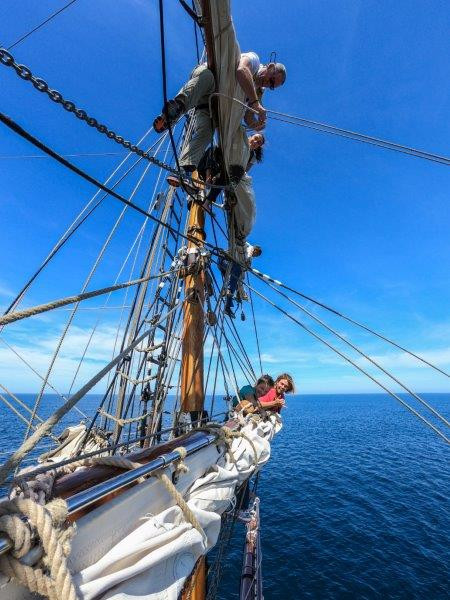 After the dark hours, where the watches were seasoned by several squalls and lightning showers, at dawn the conditions seem much more steady, which made for setting more of the canvas that was stowed away in the night. Like this, dawn finds us setting Top Gallants, the small Aap is replaced by Desmond over our main deck and Middle Staysails also come up. Royals are hoisted and in the aft Gaff Top Sail as well. Gradually the sails in the head rig are also set.

As the wind started to turn S by W and then S-ly, braces are pulled sharp Port Tack and one of our engines is started. From now on we will motor-sail changing our course, now steering towards the Argentinean coast. Until then we were experiencing a leeway of 12º to even 15º, due to the effects of the strong current flowing practically Northwards over the edge of the Argentinean Continental Shelf.

With this manoeuvre, Europa follows the wind Close-hauled maintaining a course as close to the wind as possible, while still having full sails as she approaches a bit more the coastal waters.

On this new 275º course we soon experience two effects: the current against us decreases and the water temperature rises a couple of degrees, enough for species like the Manx shearwater to show up again after disappearing from our sight when the surface water became colder during yesterday. Not just them, but once more some land birds are seen taking a ride on board, like the Blue spot pigeon that sat in the jib boom for a while. It doesn’t seem to know our intentions to sail south towards the Sub Antarctic areas of South America. And indeed, during the day we crossed from the 30º latitudes to the famed 40ºS. Known as the Roaring Forties, today they seem to allow us for a calm day, despite their accurate adjective.

The Roaring Forties are strong westerly winds found in southern hemisphere between the latitudes 40 and 50 degrees.They are caused by the combination of air being displaced from the Equator toward the South Pole and the Earth’s rotation. A few landmasses in their way serve as windbreaks, effects that don’t happen further South. Their threatening name was first used by Dutch explorer Hendrik Brouwer in his route, discovered 100 years after the Magellan circumnavigation, in 1611. He halved the duration of the trip from Europe to Java. Quoting him: “to run the easting down” was the saying used to describe the fast passage achieved in the roaring forties. After his achievement, this fast passage thanks to the roaring forties were a major aid for sailing vessels in the 17th and 18th centuries and it became the Brouwer route: The way to sail fast from Europe to the East Indies.

But there’s not where we are heading, but southwards to Falkland Islands and Patagonia, and in that direction 125nm were gained today.

Having a look at the forecast, for the afternoon the wind is supposed to decrease and become more Easterly. Before it turns more to N-ly we still plan to follow it on the same point of sail. Later on, we sure will need some sailhandling to take a more downwind course and start steering south.

In the meantime our guides repeated the talks done yesterday about the seabirds of the area and the historical context of the trip during the commemoration of Magellan circumnavigation of the world. Furthermore, in the afternoon the crew had also time enough to show us how to make some of the sailors knots used on board, between a couple of calls for sailhandling. Flying Jib was set and both the Upper Staysails on decreasing winds all the way to about 6kn, while we motor-sail against the swell now on a 220º course.

Like this we reached the end of the day, with many of us gathering on deck to enjoy the spectacular sunset, that this evening gifted us with one of the most difficult optical phenomena in the atmosphere to see: the Green Flash. On days like today, at sunset, the small segment of the upper part of the sun’s disc, which is the last to disappear under the horizon, may turn emerald-green or bluish-green at the instant of the setting. The phenomena thus usually lasts only a fraction of a second, which is the reason for calling it the “the Green Flash”,

There is no consensus on what and how the green flash is produced. The best explanation says that it is produced by the last rays of sunlight emanating from the upper limb of the sun, being refracted before reaching the observer’s eye. The shorter waves which appear as violet, blue and green suffer greater refraction than the orange and red longer waves of the white sunlight. This different refraction can cause for them to reach us in different times.

Once the sun disappeared below the horizon, a calm night followed. Nevertheless, the wind was becoming NE-ly which made for bracing squarer, hoist the Skysails and take down Desmond, while stretching the foot of the courses on their whisker poles. Now it was time again to shut up the engine and sail with the wind practically on our back, on a southerly course once more, now closer to the coast after the day steering westwards. Slightly backing winds from a more NNE-ly direction made for other smaller adjustments on the sail configuration as many of our staysails and head rig started to flap under those tail winds. And on that way, we reached the beginning of the new day, sure with plenty new sailing adventures to come.