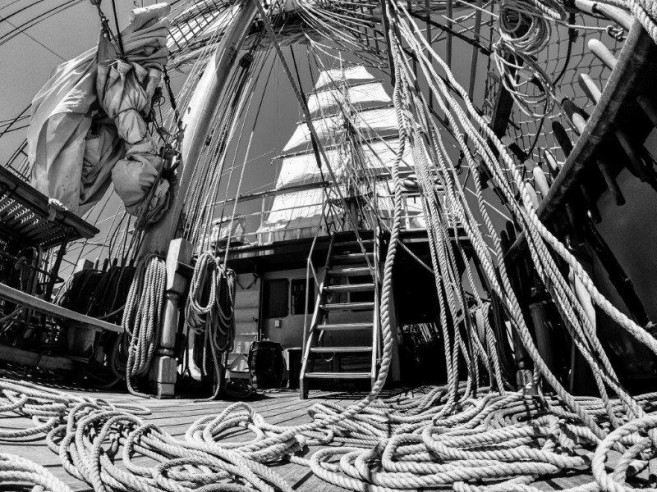 After a calm starry night, dawn met us motor-sailing with just a few staysails set. After a quite chilly night, the rise in temperature at sunrise was greatly welcomed by the crew steering and at lookouts. Virtually a windless and warm morning followed, while the Europa keeps her way under engine over calm seas. On those conditions there is not much birdlife around. After yesterday’s winds that they used to soar over the swells, today they rest sitting on the water awaiting for fair breeze that would allow them to glide again. But things were about to change soon. After morning coffee time the scheduled repetition lecture on penguins had to be postponed until further notice as the wind had slightly increased to about 12kn and veered now blowing from the North. All hands available gathered on deck to brace square, unfurl and set all the square sails, after taking away the staysails, leaving just the Fore Top Mast Staysail in the bow sprit and Spanker plus Gaff Top sail in the Mizzen. Sailhandling make us to gradually get used to the seemingly spider-net of hundreds of ropes surrounding us, and they start to make sense after listening daily to the crew instructing about their functions. Setting or taking away sail in the Europa is always accompanied by explanations and training, to help surface the sailor spirit hidden in many of us.

By midday we motor-sailed downwind with the help of one of our engines over calm seas and under the sunny skies.

Forecast is for the N-ly winds to increase during the next hours, and now the Europa is waiting for them with her canvas set, ready to sail to the Falklands. And in fact just during lunch engines are turned off and off we go quietly sailing South.

On the footsteps of Ferdinand Magellan we must say that 500 years ago the conditions they endured in those latitudes were much harder than the sunny days and calm seas we are generally having. They reached the Brazilian coast in December where they first landed. Then the fleet sailed South along the coast in search of the coveted and almost mythical way through the continent. Three months later, with a tired crew, battered ships and at the brisk of mutiny, the weather conditions forced them to stop the search and drop anchor in a sheltered bay to weather the upcoming winter. And there they ended up remaining for five months, slightly South of were the Europa sails now, just above the 50ºS, at the Bahia San Julian. We are not planning to spend all this time exploring the coast or looking for the passage that nowadays is well known, charted and is even home for towns and modern cities, but deviating from Magellan route we plan to spend the next days enjoying the landscapes and bountiful wildlife of Falkland Islands.

Our first destination lays 510nm away from us, but by midday we already had passed half of the way from Montevideo to the islands. Thanks to the winds and with the help of our engines from noon to noon today we have sailed 128nm on a good 207º course, doing an average of 5.3kn. Thus far 633nm are behind us.

Forecasted are stronger Northerly winds for tomorrow, but for the moment and the rest of the day we enjoy a good sail downwind. Under winds variable in strength between 10 to 15kn we steer placidly on a SSW-ly course at between 3.5 and 5.5 kn, without having to change the sail configuration for hours. That gave time for the crew to keep going with sailing lessons and ship’s maintenance on deck and aloft, until our way brought us to yet another beautiful sunset.