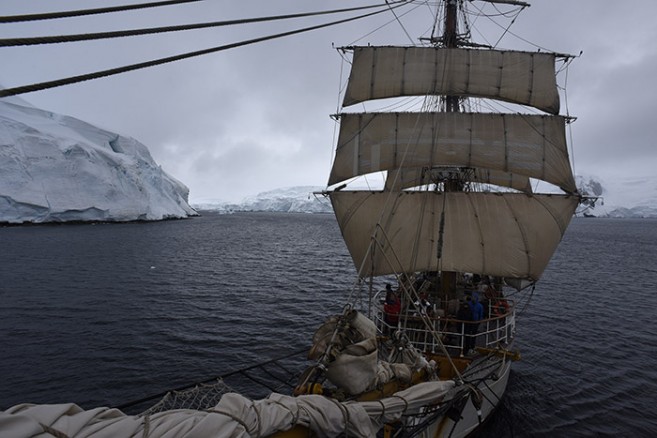 It’s been a bit of a slow two days. Yesterday we went to Trinity Island
and did a zodiac tour around. We went through a part of the island that
is referred to as the iceberg graveyard. Seth said it felt like he was
in a large cocktail glass. For me, it was like it was a floating Murano
glass exhibit with white and various gradients of blue up to electric
blue pieces on display. Seriously I didn’t think that colour blue
existed in nature, I was surprised to see it so regularly at the base of
the icebergs we passed on the zodiac. We saw horses, dogs, swans, otters
as carved by nature. It was impressive.
One of the zodiacs managed to get past the graveyard and out to the
wider ocean where a humpback berthed next to the boat. Seth was
disappointed it wasn’t our zodiac that had that experience, I said it
will happen to us, and when it does it will be a blue whale .
In the afternoon snow started to fall. It was something quite magical to
see snow falling on the deck of a tall ship. There was a small snowball
fight on the deck between those who were out there. It’s continued to
snow since. In the afternoon Seth went out to Mikkelsen Harbour. I
stayed back as I’m a little penguined out.
Today (the 24th) has been a bit of a lazy one. We were to have a
continental landing today but weather and speed meant we lost that as an
opportunity. Tomorrow morning is now thought to be our first continental
landing at Neko Harbour. Right now Seth is out exploring Cuverville
Island which is one of those more frequently visited spots with a large
Gentoo penguin rookery there. I’ve not been feeling up to it so I’m
enjoying my introvert time on the boat with very few people on it and
saving my energy for Neko Harbour tomorrow.
Tomorrow will be the halfway point of this trip (11 days), and 14 (15
with time difference) since we’ve left Sydney. I can empathise with
those days were people would take photos of their loved ones with them
on ships for months. Seth and I have been watching videos of our
daughter on our phones, and flicking through old photos of her. We miss
her terribly, but also making sure to take a lot of penguin videos to
show her when we get back.
Interested to see what Neko Harbour brings tomorrow!