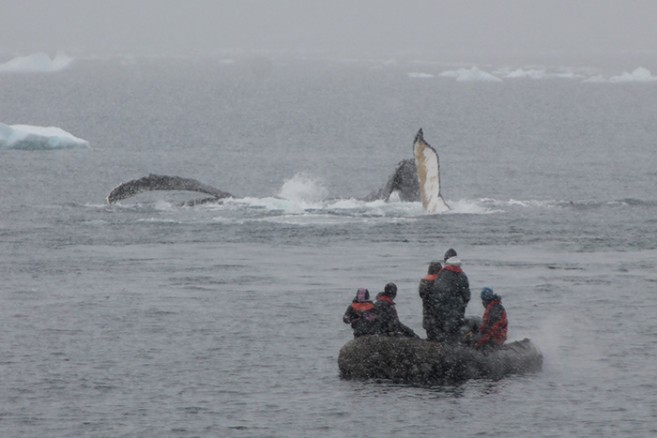 Thursday, January 25th, we started off in Neko Harbor of the Andvord
Bay, with a lovely morning landing off the side of a calving glacier. We
hiked a bit on the hill next to the glacier, slid down like on the ice
like kids and enjoyed taking photos of the local Gentoo population.
Why do I say a Perfect Day? Well, because so far it has been packed with
highlights: first continental landing on THE Antarctica!!, breathtaking
sight of the slowly calving glacier (took loads of amazing photos),
enjoyed so much spying on the cute goofy Gentoo penguins walking wobbly
along their highways, in a rush to get to the water, and to their chicks
– respectively, and had quite a bit of quiet time for meditation on the
beach next to the glacier. Our awesome guide Sarah made us aware of
keeping an eye on the calving, as to expect a wave within 40-60seconds,
and not get an unplanned “Antarctic dip”.

The day started great and it continued Better! Off we are towards the
Paradise Bay for our afternoon zodiac cruise, planning to admire the
awesome peaks of the Paradise Bay, only to discover thick mist – but
fear not: whales had plans for us. For the approx. 6 hours in the
Paradise Bay we were accompanied by at least 4-5 families of humpies
(humpback whales), in pairs of 2, 3 and 4, curious swimming around the
ship and around the zodiacs, feeding and putting on an amazing show!
Long forgotten were my feeling of cold on this misty wet snowy days: I
put on a grin and watched out for the amazing giants for at least 3h (2
on the deck and at least 1 more in the sloopje, chasing them around, to
take photographs, videos and to also use the aquatic microphones to
record their sounds). I can describe how awesome they are (some attempt
– see photos of Brad), and that huge grin is still here on my face, 5h
later :D :D :D.

To close of the day, Sarah told us the story of the brave Norwegian crew
of the ship “Antarctica”, who ended up spending 2 winters (1901-1903?)
in 3 islands on the east coast of the Antarctic Peninsula, split in 3,
lost of each other and trying to find each other, keeping their morale
up and diligently doing research: their research seems to have set the
basis for the theory (later confirmed) of the continental drift.

To top it up, our awesome cook, Rensje, just made my favorite dish, lamb
stew, for dinner, topped up with a nice fruit salad with cream and
chocolate sauce on. Booyah!! Best. Day. Ever.!!