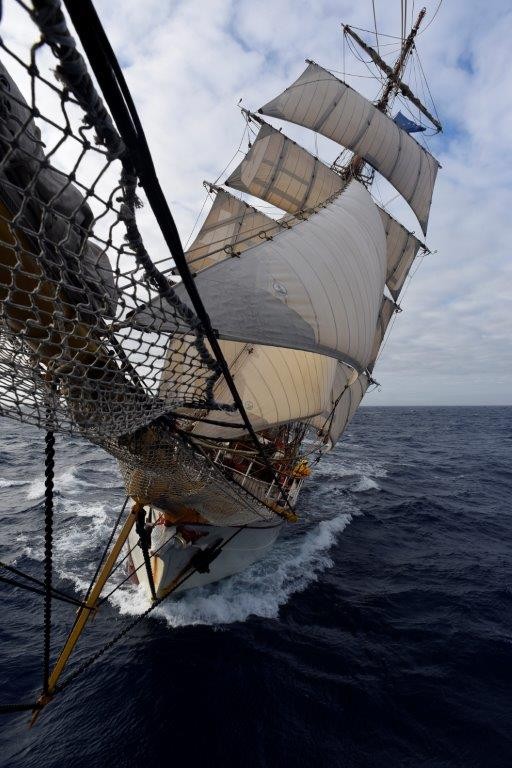 Our speed over the past few days has been ranging from a steady 1.4 knots at the end of the Beagle channel, to over 11 knots at one point in the Drake. After the pilot left us on the first day, the engine was switched off, and has not been on since. We stretched our calm time in the Beagle channel a bit – as we could see there was wind further out, and as we did not mind having some dinner before reaching the promised strong Westerly's in the Drake. So we slowly continued under sail, until after dinner we did enter the Drake. We know that the point where we reach the open ocean is the moment faces turn green, buckets are filled and doubts about the decision to travel on a tall-ship to Antarctica arise. I had promised all of this during our general voyage introduction the night before. It will happen to some of you. Don´t panic. It will not last forever. Antarctica is worth it. I found myself listening to my own words, trying to remember my conviction and keep going. A fact was that seasickness washed over the Europa as a big wave, affecting both permanent and voyage crew. The upside of the 30-45 knots of westerly winds was that they where blowing us South with a very good speed. Struggling to stay up is much more satisfying when  going in the right direction at good speed, then when battling against the waves, almost not going forward, and if so, possibly not even in the right direction. This happens too. We have been heading in the right direction at good speed since we left now. After a bit over 24 hours the wind calmed down to about 20 knots – and as this coincided with the period people usually need to get used to the sea – many new faces appeared on deck. We could open up the watertight doors, get some air in the ship, and the watches that had been consisting of around 5 voyage crew – started growing to a size where there was a certain rotation possible between being inside and being out on deck. At the moment of writing – 04:20 in the library
of the Europa on a Sunday morning – we are still a 115 miles from the nearest land. Captain Janke has taken out the charts of the South Shetlands and is preparing our entrance; Almost there.