Wearing ship twice in variable light winds & the history of Bark Europa and the visit of a curious Sea lion. It was sunrise and we have light airs from SSW and sail in a W.NW-ly direction, when we decide to wear ship again, after having done it last evening at 20:00h. 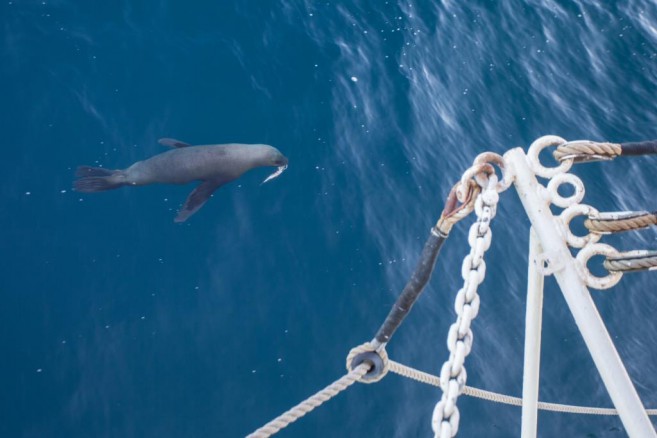 15 minutes later we are sailing close hauled again but now on Starboard tack, steering 50º to the wind, and on a SE-ly course, 120º on the compass. In other words we are sailing in our own track again and retracing our way back for a few of hours. Until just after breakfast, when the wind is coming around again and becomes SE (3 Bfrt). A new moment to practice our well learned skills of wearing ship again, bracing sharp to Port tack and now sailing on a 220º course with 5 knots. The conditions are up and down during the day, but in the afternoon the wind is dying slowly, leaving the Europa with all her canvass set with a speed of around the 2 knots or less. Port watch takes the advantage of this beautiful weather, but not really good sailing conditions, to bend on the Fore Topgallant sail that has been under repairs since yesterday, replacing the spare one that we have been using since then.

By night time, after a gorgeous sunset, again the light airs from the East, we brace a bit more square, set the Dekzwabber and our speed comes up to 2 knots, but this fun lasts only1 hour then the wind dies completely and the current is pushing us South with 0,2 knots. With no swell the Europa is just sitting dead in the water. It is a peculiar coincidence that Schouten and LeMaire went through a similar situation during the very same days 400 years ago, the remark for 27 & 28 of November 1615 is “Variable winds are torturing us”. Anyway in Latitude we are still a bit ahead of them on our Cape Horn adventure.

Not much sail handling during the day, so it was a good chance to have lectures and talks. Today we got three of them, starting with Klaas in the morning explaining the history of the Bark Europa, starting off in 1911 as the lightship Elbe IV, called Senator Brockes upto how she became what she is now. The hull was properly built using 15mm bolted plate steel on her structure and double thickness at the water level, to deal with the heavy conditions, swell, currents and also including drifting ice flowing down the river 100 years ago. The rig was pretty different, three masted as well, easier to use, no yards and square sails, and no engine. She shone her light on different positions along the entrance of the Elbe River until the 70’s when she became P8 Reserve, a platform to test equipment being towed up to different positions. She was off duty in 1977 and sold for a scrap price to a new German owner with big plans but no money to materialize these plans. Then Harry Smit from Holland bought the hull and it took him 8 years to convert the ship in what she is now. Since then she is in constant maintenance and receiving constant improvements during her second live. As she sails the crew keeps a maintenance program, and she spends two short periods every year in the shipyard. Cape Town in April and Zaandam in August.

In the afternoon Elliot continued with is set of talks and practices on celestial navigation. Today he practiced with us to take a sight and go through the whole process to find the position, putting the theory to practice. And after dinner our fellow voyage crew Bill delighted us with a slideshow with his fantastic shots of his travels around the world.

The most remarkable wildlife sight today was the visit of a South American sea-lion, she was hanging out around the ship after dinner for a while, showing her interest for Sirius (barking at her) the ship and her crew, checking the hull from every angle and looking at us with curiosity. She took the chance also to catch a fish, that probably got attracted by the Europa and her slow pace, looking for shelter, as many fish use to, aggregating around floating objects at open sea. The Patagonian coast, on either side in the Pacific or the Atlantic is home for big colonies of those seals, that now are arriving to the coasts and starting their breeding seasons.