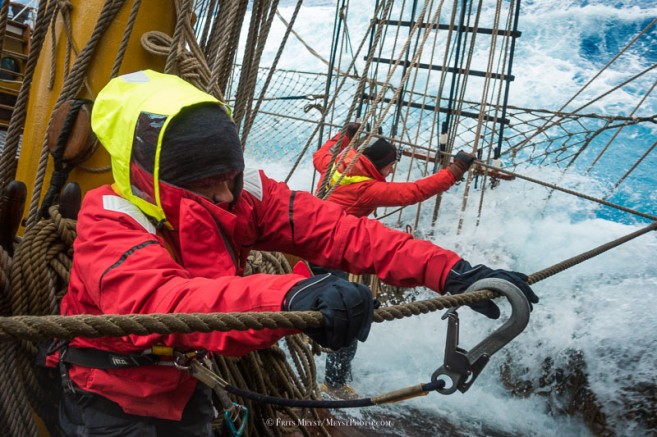 The permanent crew on the Europa have proved remarkably impervious to the conditions. The Voyage Crew carefully outfit themselves it hi-tech yachting gear and discus layers of thermal warmth to brave the chills of the northern reaches of the South Atlantic Ocean. Meanwhile the permanent crew are wandering around in casual clothes, with possibly a light jumper over the Europa polo shirt at night if it is gusting at forty knots.

Perhaps the interviews are held as a survival exercise. Candidates are instructed to turn up in casual loose clothing suitable for intensive physical exercise, then lured into a waiting room which is actually a meat freezer with a broken fire sprinkler. After an hour in this manufactured freezing rain the interviews commence with a manual dexterity challenge. Any sign of chattering teeth when answering questions or discomfort about being soaking wet is a clear indication this person is not made of the right stuff.

At the first sign of precipitation the Voyage Crew produce their wardrobes of Musto MPX or high end Henri Lloyd. Some are suitably weathered, but most are immaculate. But at least we remembered to remove the price tags, even if the neat vertical creases are a giveaway. The permanent crew simply turned up the collars of their polo shirts - assuming that they even noticed it was raining.

As we headed south and the rain got heavier and longer, the temperature dropped beyond the imagination of most Australians and the wind chill factor entered jet stream territory, the crew began to show signs of noticing the climate. Sweaters appeared during day watches, and even waterproof salopettes. Musto also featured heavily here, causing many of the Voyage Crew to feel vindicated in their choices. But this Musto was well used and from previous seasons. The good Doctor was even spotted wearing closed toe footwear.

Stopping at South Georgia and entering the Scotia Sea, things got serious. The Voyage Crew began to resemble Michelin Men as we marvelled about just how many layers could fit under our waterproofs which were showing signs of actual use. The permanent crew began to wear beanies and Sarah even raised the hood of her jacket on two consecutive days. Their waterproof jackets appeared during night time watches. But most still did their rope handling without gloves, presumably to be more in tune with the feel of the boat. Perhaps the vibration in a halyard can be used to detect that a screw at the top of the mast is a little loose and needs someone to go up with a screw driver and tighten it by an eighth of a turn.

Martijn displayed the first chink of human frailty in the crew and was seen wearing a faux-fur hat with ear flaps. The Engineers retreated to their cosy engine rooms, the list of maintenance tasks which had been carefully collected for these latitudes proving the benefits of prior planning. But by and large they held the line.

But even amongst these hardy souls, Eric the Impervious stood out. A T-shirt turned into a sweatshirt turned into a light fleece jacket by the time we left South Georgia - or what the Voyage Crew would currently describe as the minimum possible base layer which - when supplemented by a down jacket and maybe a merino sweater - would be fine for the lounge (or possibly the deckhouse if the heating was working and the door was closed).

Until today. An illusion was shattered - as the wind gusted to fifty knots, the temperature hovered around zero and the rain, sleet and snow whistled horizontally over the deck, our illustrious captain was spotted wearing rain gear. It was of course well weathered and not this year’s style or colour, but it was still rainwear. Even if he saw no need to use the hood, and seemed not to notice that his head was dripping with water after yet another foray into the cataracts of the main deck. For authenticity it should really have been the old style oilskins made from tar treated worn-out sail-cloth, with a Sou-wester kept in the wheelhouse for head protection in hurricane level downpours. But it wasn’t - it was Musto. Naturally.

Ghost Writer of the Storm, on an extended tour of the Scotia Sea near the South Orkneys

ghostwriter in the storm, i just love your articles! so funny - thanks for taking me there again :). looking forward for more. Danny (cape-to-cape2018)