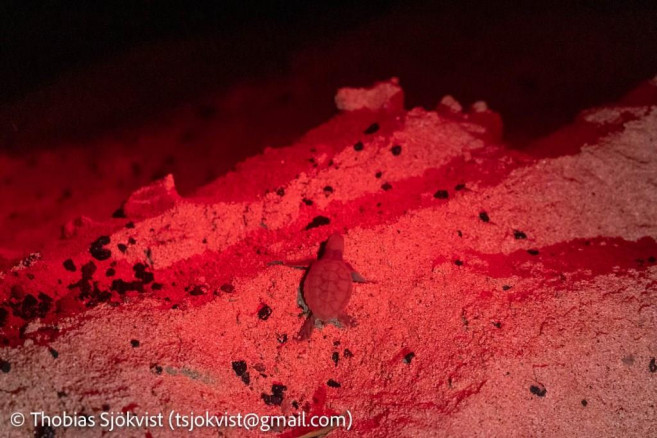 "Land sighted!" was called by the lookout at 7.39am on Sunday 22nd May as the lumpy silhouette of Ascension Island was first spotted on the horizon, but with the wind dying down there would be another day of sailing before we stepped ashore.
With studding sails set, Europa made steady progress and, while slow enough to fish, Enguerrand and Marcus caught seven fish in no more than half an hour with the kind of skilled teamwork we have become used to seeing from the ship's permanent crew.

With sunny skies, Ascension gently grew larger as the day wore on and, by nightfall, the red lights of the island's military installations were filling the horizon, with anchorage in Clarence Bay completed shortly before midnight.
Sunrise on Monday 23rd May presented us with an island wholly different to St Helena, an array of antenna, radar domes and disks scattering the red rocks of Ascension's volcanic landscape.
Sailors may be forgiven for thinking they had arrived on Mars.

Indeed the dark lava-like soil covering the island is only broken by the green slopes of aptly named Green Mountain, where a program of introduced trees has brought a tropical cloud to the island's summit.
While St Helena's capital Jamestown was compactly tucked into a valley, Georgetown on Ascension is a scattering of industrial equipment and bungalows, rather in keeping with the moonscape beyond.
Ashore, we headed into the island to explore the abandoned NASA site (sounds cool, really just some concrete relics), before hiking at Green Mountain, swimming at English Bay and eating lunch at Two Boats village.
On our travels, we encountered various endemic creatures: the hovering Ascension Frigate birds had already scouted Europa before she reached anchorage, but the large, bright orange land crabs we now found were quite new to us.
These rather comical creatures cannot breathe underwater and live their lives out on the slopes of Green Mountain, looking like every crab from a children's TV show.

Later on, we were taken on a tour by a local conservationist, who showed us how they were trying to protect the critically endangered Ascension Parsley Fern in mountaintop shade houses.
While the wildlife here is completely different to St Helena, both islands share a constant struggle to protect their unique creatures and varied landscapes.

Life for people on Ascension is different also.
There is no local community as such here, as the 900 residents are all here for work or family, and must leave once their contracts expire, but people are still friendly and helpful wherever you go.
All property (apart from Georgetown church) is privately owned by the island's government or military contractors, and people here are often St Helenians working for the local authorities or Turkish, Philippine and British contract staff working on the airfield and harbour.
Surprisingly, there is little hint of military presence here, despite the RAF/USAF base, and apparently just four American military personnel and a handful of RAF staff actually work on the island.

Even so in every corner of Ascension there are antenna and radar installations serving everything from worldwide GPS tracking to the BBC world service's Atlantic relay station.
After dinner on board on 24th May, we headed ashore one last time to see one of the natural world's most remarkable sights at Long Beach.
Moments after stepping on the sand, hundreds of green turtle hatchlings broke free of their nests below us and made their frantic dashes for the sea in the cover of darkness, where they will run a gauntlet of predatory animals as they journey to the shores of Brazil.
Only one in a thousand will make it.

As we waited for the zodiac to return to pick us up from the pier head, we watched five sharks swimming in the waters below us, a pleasant reminder to watch our step as we boarded the little boat.

It is now 28th May, and the islands are confined to our memories, for we will not feel the stable ground of terra firma for almost a month.
But with the seas gentle, the wind following, and the skies clear, there are none yearning for anything but sailing!