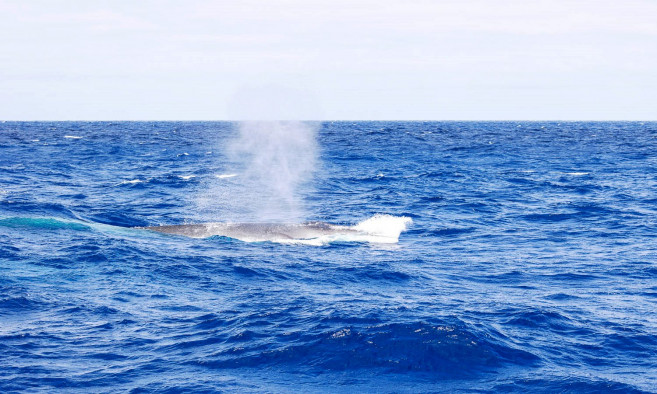 2am in the morning.

Deckhands have been scuttling around fixing lines, hauling sheets and hoisting halyards. The main topsails are already taking in the breeze and other sails are not far behind. With one last chug the engines fall silent. After months of anticipation and preparation, we are finally sailing.

To a novice like myself, Europa initially appears an old-fashioned ship, a replica of something from the distant past, but a week on board has quickly proven otherwise. Europa is a modern sailing ship in every sense: her sails spread to pull her forward in the lightest breeze; her radar scanning waters many dozens of miles away; her galley crew preparing delicious meals even as she rolls violently in larger swells.

There is not a thing on board that is not carefully positioned, practiced and prepared. For the first two days we had only a light breeze with which to make headway, but the crew have many tricks to make the most of it. We brace the sails and make subtle course changes for a steady four knots. There is not the faintest consideration that we use our engine, this is a sailing ship through and through.

Already we have seen a fin whale, dolphin, flying fish, storm petrel and, my own favourite, the albatross. Occasionally the mighty bird disappears as it soars effortlessly between the wave tops. Even a sea turtle was witnessed gliding by the starboard bow, the gentle creature wandering hundreds of miles from land.

We are now 400nm from Africa, the nearest landmass, but the ocean is welcoming, beautiful and very much alive. Only a week has passed but we all know one another by name, and spend much of the time laughing and chatting. There are many terrific characters aboard Europa, and I shall save their introductions for a later date.