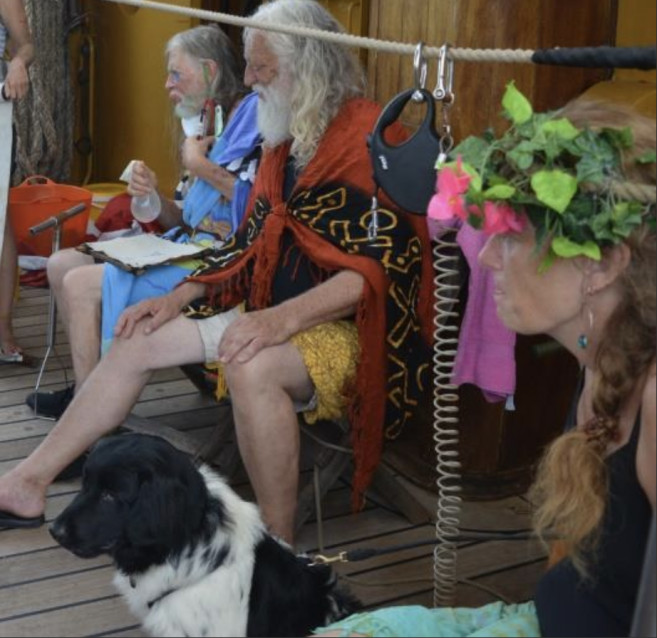 Sailing over the equator is a unique milestone for any sailor, a rare privilege to be done aboard a tall ship. Only one of the sixteen voyage crew had ‘crossed the line’ before. Despite the sense of achievement, we were all acutely aware that there was work to be done yet before we could call ourselves “shellbacks”, for we first needed to prove to King Neptune and his royal court that we were worthy sailors at the customary crossing the line ceremony the following day. After the sea king came aboard, we were forced to complete various tasks in what can only be described as rather smelly conditions, before bowing to the king, royal surgeon, barber and priest. Needless to say, crossing the line is no ordinary achievement, and the ceremony which follows is equally unusual.

But crossing the equator changed more than just our status as ocean-going sailors: arriving in the northern hemisphere brought the dreaded doldrums close, and we would need to pick our course carefully to make the most of light and unpredictable winds. Looking at a map, a direct course from our position to the Azores would take us due north past Cape Verde, but this would be no good, for we would quickly encounter northerly winds (blowing from the North), and would spend too much time in the doldrums. Instead, we are steering north-west in search of the easterly and north-easterlies that will make passage towards Europe possible.

As we leave the south-easterly trade winds behind, we are forced to sail close-hauled - that is as much into the wind as possible while still making forward progress. This requires bracing sharp and setting all staysails, and results in the ship heeling, pinned to port at such an angle that one might find their soup in their lap if they sit at the wrong end of the table. Despite this, no one is seasick and we are all enjoying walking with one leg longer than the other.

Regardless of our best efforts, avoiding the doldrums entirely is impossible, and sure enough we found ourselves becalmed on 4th June. We used the opportunity to swim in the 4000m deep water below us, which was 27°C on that sunny day. The joy of stepping off the ship to see it from a distance never gets old, for her parallel lines, broad curves and glistening figurehead are a marvellous sight, particularly on the open ocean.

Very occasionally we pass a cargo ship out in the ocean, but the eerie silence with which we pass one another only serves as a reminder of how remote we are. We could travel 1000 miles in almost every direction and not reach land. And yet our little community of sailors on board Europa remains lively, busy and exciting. Usually working, always sailing.

Matti, we are so excited that you are out there living your dream! Not only are you honing your sailing skills on such a beautiful ship, but you are clearly an incredibly talented and evocative writer. We loved reading your blog and imagining your extraordinary seafaring adventure! May your voyage continue well! Thinking of you, best wishes, Jo and Pete