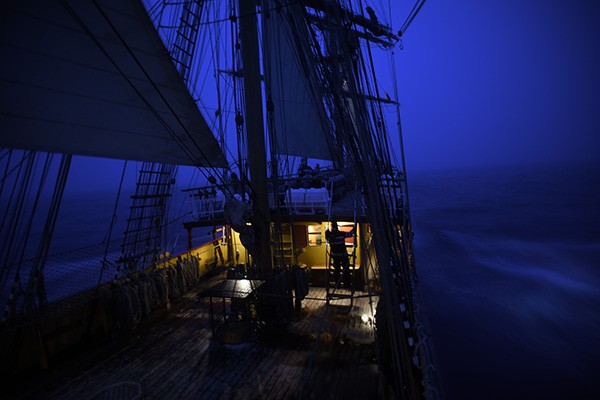 And so, we are suddenly back on the Drake. During the night we put up the rest of the sails and we are making good speed in the right direction. It is a bit foggy and wet, but the sea is relatively calm. The swell creates a moderate amount of seasickness – especially during the morning. Later in the day the wind dies out and the engine i switched on again during lunch. It is a calm day – we have a lecture about the race to the South Pole, the race between Amundsen and Scott and in the afternoon, evening and night we learn several knots. Danny specializes in Fancy knots, Filémon describes himself as a man of practical knots. Apart from that many hours are spent in our bunks – catching some sleep after our days in the Antarctic. By the time we have our 8 o´clocky we have sailed a 130 nm. We have 485 miles to go to Cape Horn. Eric informs us about the updated weather forecast – it looks like the Great Low is delayed a little, and the situation looks much better than yesterday around this time. Almost everyone is present in the deckhouse – which is rather uncommon for a first day back on the Drake. We motor into the night with the staysails up. The night is unfamiliar dark. Even though we did not cross the Antarctic Circle, and the sun set every night, during our time in the Antarctic it felt as if the light never went. Now it did, it is dark, we are on our way North.