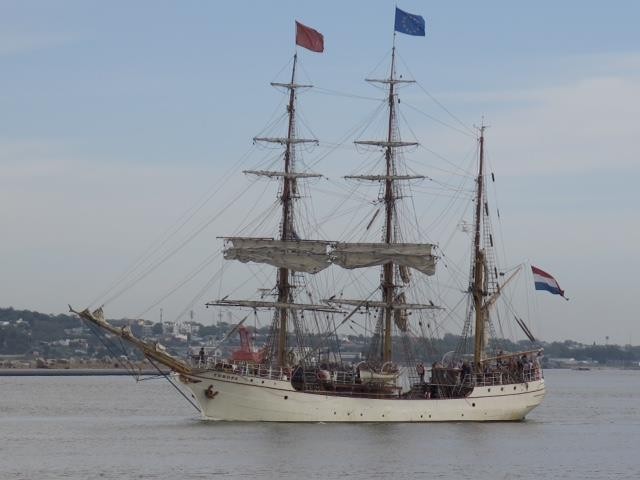 Pretty busy night on deck dealing with increasing swell and changeable winds. As a reward for our night efforts and withstanding of the relatively rough conditions, the new day welcomed us with a gorgeous sunrise.

Pretty busy night on deck dealing with increasing swell and changeable winds. As a reward for our night efforts and withstanding of the relatively rough conditions, the new day welcomed us with a gorgeous sunrise. The mild conditions were inviting for some instructions out on deck, so we started with some basic line handling during our watches. The runs on deck with all those explanations continued during the afternoon together with our first try to go aloft during climbing instructions.

We are gaining distance Eastwards off Rio de Plata, and slowly the depth is increasing, helping the swell to become a bit lower and longer. During the afternoon, taking advantage of the good sea conditions and smooth progress, we started the Biosecurity Procedures mandatory for visiting South Georgia and Antarctica. Human activities on those areas are pretty restricted, even though thousands of workers and visitors set foot on them. One way to minimize the introduction of alien species on those relatively unspoiled systems is to take good care of cleaning the gear and bags we will be using to go ashore. Vacuum cleaners to hoover our outdoor gear, backpacks and camera bags were set in the Deckhouse for all of us to use, and they will be there until we all finish with those procedures.

As the day went by more and more seabirds were observed. Several White-chinned petrels flu around accompanied by increasing numbers of Black-browed albatrosses and several Shearwaters also were spotted.

Under the light winds we were experiencing those gliding-flight masters haven’t got great chances to soar around and preferred to sit and wait for the wind to increase instead of spending energy flapping their huge wings. And even a few Magellanic penguins were spotted, taking a rest floating on surface.

As we are unfurling and setting canvas before dinner, a group of 20 to 25 Dusky dolphins joined us for a while, bowriding the Europa and delighting us with some acrobatic jumps off the water. Dusky together with Peale’s dolphins are the most common dolphins on that waters, being the Peale’s a bit more coastal and the Dusky occupying areas a bit more offshore but never too far from coast.
After dinner our guides could finish the voyage introduction talk, giving an overview of our whole voyage, recap a bit of the wildlife sighted during the day and give some historical hints on the Belgium Antarctic Expedition lead by Adrien de Gerlache, that departed from Montevideo same day of our embarkation.

During the afternoon, evening and night the wind has been playing around a bit with us, starting with SW-ly winds, veering later on more to the WSW, then backing to the SE, veering again later on to SSW and becoming more S-ly during the night. That lead to quite busy watches, keeping us up and running setting, stowing away and even wearing ship at midnight.