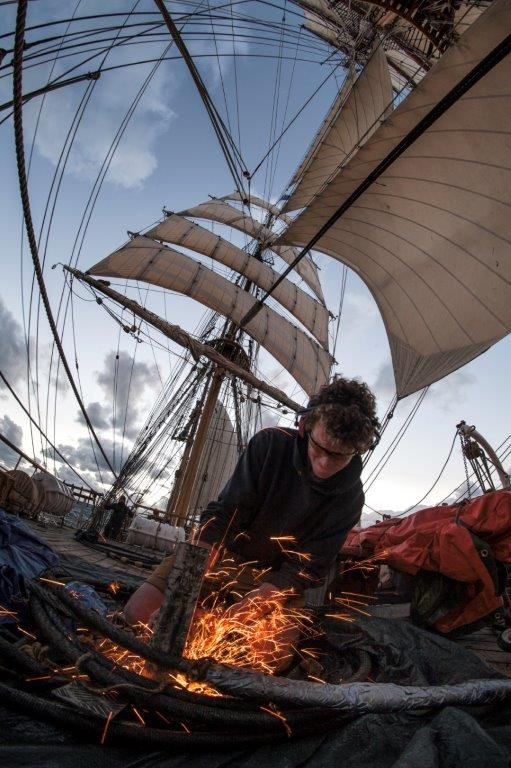 Late last evening and during the night we experienced an increase in the wind, backing from W to SW, blowing at 35 kn and gusting closer to 40kn. Steering on a 90º course and braced square we reached speeds over 11kn before the wind started to ease.

Europa rolled over the increasing swell as the wind was getting less strong. During the night, many stars could be seen in the spaces left between the high clouds. As we get closer to dawn, the cloud cover starts dissipating, leaving behind clearer skies, just masked from time to time by passing little squalls. During the morning more canvas is set. Sailing on a broad reach in 20 to 25kn of WSW winds, we add the main royal, outer jib and all staysails to the sail configuration. With this we keep a good speed between 7 to 8kn on an easterly course. Later on, the starboard upper studding sail is also set for a few hours.

That lasted until a squall brought first a decrease on the wind force and then a sudden increase as it passed in front of us. 30kn of wind together with a 30º backing shift combined with a slight steering off-course, putting us on a beam reach, made the studding sail boom clearly bend and it was quickly decided to take it down fast during lunchtime. The fair winds we are using are related to the tail end of the low pressure system affecting us for the last couple of days, but they will not last for very long. It is forecasted that during the night it will finally pass, leaving us under the influence of a high pressure area with calm winds associated for around a day. Afterwards, if all goes according to the forecast, the next depression will arrive with strong northerly winds and it will hopefully drive us until the end of our trip.

During the rest of the day and night we keep the same sail setting as the wind also keeps blowing between 18 to 25kn from the SW, and the Europa seems pretty happy riding the moderate seas on a 90º course at speeds between 7 to 9 kn. Some small squalls and short rain showers crossed our path, bringing slight momentary increase on the gusts, not enough to take away any sails. In fact during the last 24h we have done 188nm, and now is just above 1000nm left to arrive to Cape Town. So far, during this crossing from Tristan da Cunha we have kept an average speed of 6.6kn, lowering the overall average to do if we intend to arrive on the 31st March after lunch, down to 5.2kn.