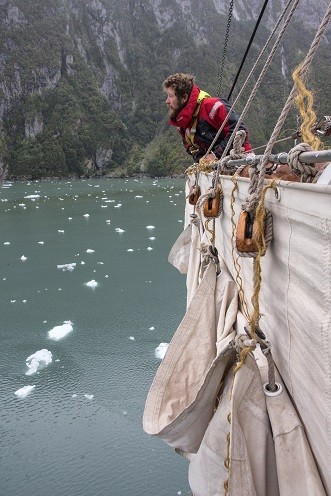 Last night as we sail into the Beagle Channel, even though the wind was very variable, it picked up to 25 knots from the West, allowing us to stop the engine and sail along under Top Sails, Lower and Middle Staysails, Inner Jib and Fore Top Mast Staysail and the Spanker.

But in the early morning, the wind decreased to 16-17 knots, and as we were needing around 6 knots of speed to reach Garibaldi Fjord entrance (where we plan to spend the first part of the day), we started motorsailing again, downwind on our E-ly course. First Main Middle Staysail, Dekzbabber and Spanker are taken away together with the Spanker, under grey skies and rainy morning. Before turning North into the narrow and spectacular Garibaldi Fjord, we brace sharp on Port Tack, and change course 90º Northwards. As we get through the fjord mouth the wind drops and we take away all Squares that were set, motorsailing at 6 knots with the lower Staysails, Mizzen Middle Staysail, Fore Top Mast Staysail and Inner Jib set. As we get deeper in to the fjord all sails are taken away, and taking advantage of the calm conditions, the Main Top Gallant, that is been under repairs from Punta Arenas and now is ready to be put back on its yard, is hoisted and bended on. Slowly we keep motoring along the fjord as brash ice and ice growlers start appearing in the waters around us. Garibaldi Fjord is one of the most spectacular side-fjords of the main Beagle channel.

The origin of the name is still veiled, but there is evidence that it was given by the missionary De Agostini, to commemorate the Italian hero Giuseppe Garibaldi. It is a 11 Mile inlet, cutting
between high mountains. At its head hides one of the finest glaciers of the area, coming straight down to the sea from the glaciate mountains of Darwin’s Range. Around 09:00h we follow the east bend that the fjord does, and suddenly we are close to the head of the fjord, dominated by the impressive glacier front. Other secondary glaciers surround the area, some of them
being hanging glaciers up the mountains with big waterfalls falling into the fjord waters. But next to the large glacier front of Garibaldi, one of those secondary ones also reach the waterline with its impressive ice towers.

We spend around 45 minutes enjoying this nature’s beauty, hearing the glaciers growl and crack, even witnessing a couple of big calving when the ship is at the closest position next to the ice cliffs. After our visit we turn back and start our way off Seno Garibaldi and join again the Beagle Channel. In the meantime the rainy weather gives us a drier slot, used by the crew to give us the climbing the rig instructions, mandatory if we want to enjoy being aloft or help up the masts with sail handling. At lunchtime we change course again northwards, getting on another side
fjord of the main Beagle Channel, this time we motor for 5 miles along Pía fjord, along its Y-shaped inlet hiding a great tidewater glacier at the head of each arm. The entire inlet is spectacular with high granite walls in all directions and sharp glaciated peaks above. After lunch we were close to the glacier front of the East arm, sharing the place with a nice sailing yacht called “Abel Tasman”, owned by Roger, an old friend of the Europa and some of the crew.

In fact as we cruise along, he comes on board to greet friends and share a couple of words. He is sailing in a long trip as well, with a Brazilian filming production on board. After our visit to the fjord, we turn around and sail towards the Beagle Channel again. Time that Jordi uses to give us an historical talk on the Darwin’s voyage in Chile. He explained a bit the trip around the world on board the HMS Beagle under the command or Captain Robert Fitzroy where Charles Darwin was sailing as a Naturalist. This was the second trip of the Beagle (1831-1836) and started a new revolution on the natural science world, from geology to biology as it was the starting point to develop (in the following years of study of all the notes and specimens collected) one of the best ideas ever thought, the origin and evolution of the species though natural selection. When reaching again the main channel, the Westerly wind has picked up, and we set Lower staysails and Mizzen Middle Staysail, Inner Jib, Fore Top Mast Staysail and Top Sails, stopping the engine and sailing almost downwind at 5 to 6 knots. Soon Aap and Fore Top Mast Staysail start flapping and are taken down. From now until darkness we sail along the last part of the so called Gracier Alley in the Beagle Channel:Romanche, French, Italiy and Holland glaciers with their majestic fronts rumbling into the sea. As we sail by under tailwinds, the Deckzbaber,Aap, Spanker, Main Upper Topsail are taken down. Great feeling sailing at around 7 knots the famous Beagle Channel, surrounded by the impressive glaciers, mountains and the typical beech forests of this desolated corner of the world. Forested at low altitude nd crowned by high snowy peaks over 200m in height.

All those places visited during the day have been almost free of human intervention since the native inhabitants, the Yamanas, abandoned their traditional way of living here on their canoes and temporary settlements. Since then this area is just used by local fishermen, few private yachts and a Punta Arenas local tourist company. Sailing along the Beagle Channel, soon we reached the end of its NW arm, the place where its SW and NW channels join together in a single passage. Near to this place we could see Caleta Olla at our Port Side, a magnificent anchorage, very close to Ventisquero or Glacier Holanda, providing good shelter. Is one of the best known anchorage of the area and is heavily used by the sailing yachts and fishermen boats from Ushuaia or Puerto Williams. The name of this small bay (“Olla” = cooking pot) was given after the shape of this protected area against the strong winds and currents. The place was even used by Captain FitzRoy during his first expedition to the area in 1830. First they stopped at the small island laying in front of Caleta Olla, named Isla Diablo (Devil Island). On May 8th he wrote ”We reached the place where the two channels commence, and stopped for the night on a small island. Soon after dark, one of the boat’s crew was startled by two large eyes staring at him, out of a thick bush, and he ran to his companions, saying he had seen the devil! A hearty laugh at his expense was followed by a shot at the bush, which brought to the ground a magnificent horned owl”.

After passing this area we sailed downwind straight ahead towards Puerto Williams, the Southernmost town in the world, taking the Mizzen Top Gallant staysail down and later on during the night leaving the prosperous city of Ushuaia on our port side. The whole area comprising the Southern shores of Straits of Magellan to Cape Horn itself it was declared in 2006 a Biosphere Reserve from the UNESCO, being one of the most pristine areas in the world.

Hey I love reading the updates. When are you going to update your log?

I just found the log and I hope that Colin is having a great time. Nothing to report from Williamstown. The knee is getting better. Love Judy