Fighting the currents and winds in the Drake Passage. Trying to get westwards. 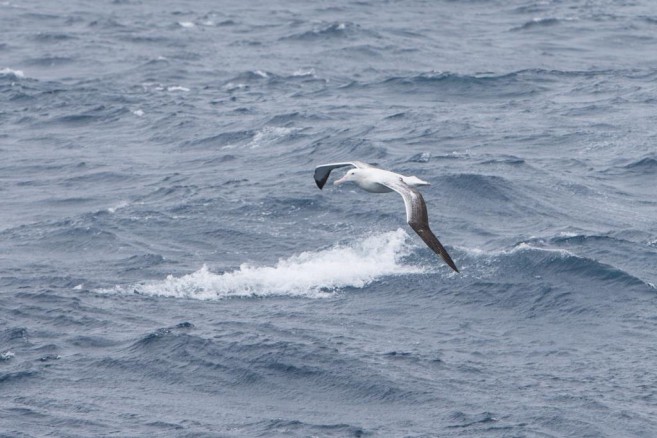 struggling to the West

After being blown off Cape Horn, and as we try to get westwards, the strong winds and the current are pushing us South, in the Drake Passage. We are “lying to” overnight. From the windforce 9 yesterday, and the gusts up to 50 knots, in the early morning the wind starts to drop down to 20-25 knots, and slowly veer towards the North. As soon as we can we start setting sails again. By the afternoon all the way to Royals are set, up to middle staysails, Gaff Top sail, and on the head rig all the way to Outer jib. As some showers and squalls pass by, upper sails and jibs come up and down often. We sail on Northerly winds and high seas struggling to gain miles towards the West.

Later on, after coffee time the wind comes up again to 30-35 knots and starts backing from N-ly towards NW-ly. Time to lower some canvas. This wind together with the SE-ly going current, keeps pushing us to the SW. In fact the difference between our heading and what we actually do over the ground is between 35 to 40º difference. The same experiences happened quite often to the early explorers, being blown out Southwards as they were sailing on these Southern Patagonian waters.

Afterwards the wind becomes West and we sail South just under Topsails, Mizzen, Lower Staysails and a couple of jibs on the head rig. During the night luckily the wind veers towards the NW and lower its force again and we can get some progress towards the West. On our daily meeting Klaas give us information about our situation. We passed westwards the latitude where we were blown off the Horn yesterday, as since we set sails we could do some way on a SW, and WSW direction. We have to take any opportunity that the Drake offers us to try to get more to the West, and with the strong winds, gusts, heavy seas and sailing close hauled, presumably the sailing during next days will involve quite a lot of sailhandling.

At the moment of hour meeting, the bearing to the Horn is 21º and we are 73 nm away. During the last 24 hours we have sailed 53 nm on a general course 176º. 650 nm separates us to get to the 50ºS northwards along the Chilean coast. We are pretty close to Diego Ramirez small group of islands, trying to sail South of them. That group of two main islands, plus several smaller ones, shallows and rocks represent the Southernmost point of Chile, as they are located 30 nm South of Cape Horn.

They are home for large Black browed and Grey headed albatrosses, Magellanic and Rockhopper penguins, and Fur seals. In fact, during the day we have seen all those species close to the ship on the Drake Passage wild seas. Countless Giant and Cape petrels soar the winds around the ship, and surprisingly large numbers of Royal and Wandering albatrosses as well, gliding majestically with their 3.5 m wingspan over the swell and strong winds of the Drake Passage. Historically the Drake played an important part in the trade of the 19th and early 20th centuries before the opening of the Panama Canal in 1914. The stormy seas and icy conditions made the rounding of Cape Horn through the Drake Passage a rigorous test for ships and crews alike, specially for the sailing vessels of the day.

This stretch of water between Cape Horn and the South Shetland Antarctic islands, bears the name of the famous 16th-century English privateer, seaman and explorer Sir Francis Drake, even though he never actually sailed it. In 1578 he navigated the waters of Magellan’s Strait. Heavy storms hit his ships driving them to 57ºS, 61 miles below Cape Horn’s latitude into what we call now the Drake Passage. Drake's voyage helped to give a more accurate picture of the true geography of the world, discovering for example that Tierra del Fuego, the land seen to the south of the Magellan Strait, was not part of a southern continent as had been believed previously, but an archipelago, or group of islands. This meant that if the American continent was not connected to a southern continent, the Pacific and the Atlantic oceans met at Cape Horn. It should be possible to sail ships around the bottom of South America. This was the Cape Horn route, eventually discovered in 1616 by Schouten and Le Maire.

Later on another illustrious expeditionary: Captain James Cook, on his research expeditions around the world sailed those waters. Besides many discoveries during his trips he sailed through the waters where we are on now on his both of his expeditions, greatly increasing the knowledge about the area. On his first trip on the “Endeavour” they sailed the Strait of Lemaire between 22nd and 25th January 1769, rounding Cape Horn on the 28th January. Sighting Diego Ramirez Island on the same day. They conducted research and observations on ethnography, botany, biology and landscapes unique to Cape Horn area. On his second voyage, this time on the “Resolution”, Cook approached the Cape Horn area from the west, passing it from the Pacific to the Atlantic in December 1774. Cook made interesting observations about currents and included extensive lists and descriptions of the regional wildlife. He circumnavigated Antarctica, therefore establishing that Antarctica was a continent detached from the other ones. His journals continue to inspire global interest in the dynamic marine and landscapes, flora and fauna of the Cape Horn area.