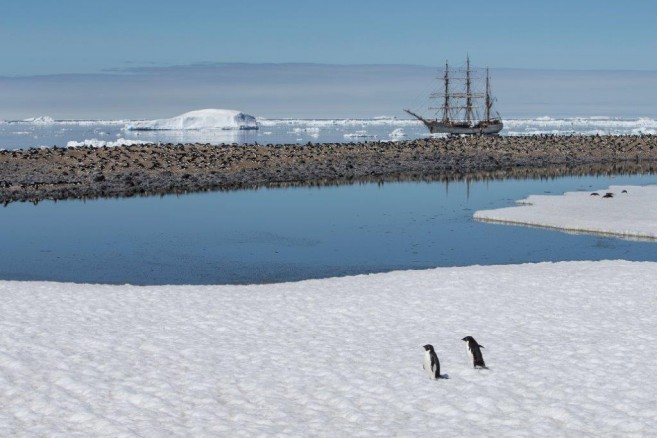 Having all enthusiastically participated in ‘gift giving and stealing’ at the Sinter-Klaas evening the night before, the ship started motoring at 4am out of the Sound and into the Erebus and Terror Gulf, our destination Paulet island. It was visible at breakfast rising out of a horizon filled with icebergs and sea-ice. Many of us were early out on deck to enjoy the great spectacle offered by the Weddell Sea under good weather, as the sun rose on almost clear skies.

Europa was skillfully steered between sheets of pack ice , icebergs and some large tabular icebergs towering above our masts, until reaching our anchorage on the North-east coast of Paulet. This perfectly pyramid shaped volcano is circular built with a diameter of 1.5 km. Dwarfed by the larger Joinville, Dundee and Durville Islands, rivals them with its beauty and distinguished character.

Paulet was named by James Clark Ross on his 1839-43 voyage. Its name honours Captain George Paulet of the Royal Navy. Its red colour is the result of the oxidisation of the many minerals in the volcanic rocks by the gases released in the final phase of eruption. The two major points of interest are the historical story and the Adelie colony, more than 100 000 strong. There is also a large colony of breeding Antarctic shags, with chicks present today. Wilson’s storm-petrels and snow petrels nest there too, and were evident in flight above us.

The island took its major role on the history of Antarctic exploration thanks to the Swedish Expedition at the beginning of the 19hundreds. Nordenskjold’s ship, Antarctic, was crushed and sunk by the ice 25 miles east of Paulet island on 12 February 1903. After 14 nights camping on ice floes, and a six hour row, the 20 crew reached the island safely. The legendary CA Larsen was captain and they set about over-wintering by building a commodious hut with the abundant and excellent volcanic slate, insulated by guano and mud. Its structure is still clearly evident with the separate sleeping and kitchen areas, and one can appreciate their generous dimensions: Sleep room = 7.3. x 6.7m (24x22ft); 2.4m (8ft) high in the centre and 1.2 (4ft) at the sides; kitchen = 3 x 3.7m (10x12ft). A roof of canvas sail was constructed and later covered in seal skins.

The other historical event was the death of the cook Ole Wennersgard, aged 22, that first winter. He is buried in a raised grave which can’t be accessed at this time because it is in the middle of the Adelie colony. Since Europa’s last visit, the cross has lost its cross piece, so that only the vertical remains.

The whole landing was pretty special, not just because of the historical significance of the place, the unique and fantastic landscape and the large amount off Adelie penguins inhabiting the island, but also because we had a flat calm morning with brilliant warm sunshine. Along the coast, the waters are filled with icebergs, ‘bergy bits’ and sheets of pack ice ice, all floating along happily in the strong current, giving the Europa hard times from time to time at her anchorage.

The penguins and shags were busy at nest and in flight, with lots of eggs evident. We hiked along the beach edge to ensure our 5m distance from the colonies, and were rewarded with a Southern Giant petrel ripping into a dead Fur Seal right in front of us. After passing Wennersgaard’s grave, we ascended inland to the impressive ruins. At both these sights Dr Bob, gave us a synopsis of their historical contexts, and we learnt that Wennersgaard wrote to his mother, foretelling his death, and comforting her with the knowledge that he welcomed his finally meeting God and finding peace. While he wrote that he had bronchitis and scurvy, the latter is unlikely given their diet of fresh meat, and pneumonia is a far more plausible etiology.

From there we descended to a volcanic crater lake, half frozen still, along which shore we edged, before ascending to a gap between penguin crowded hills, to the glorious ‘signature view’ of the landing.  Below us we enjoy the vista of the long beach and a large melt lake also partially frozen, edged by Adelies, while Europa sits at anchor at the background, bathed in sunshine, waiting for us to re-embark with a good lunch ready for us.

Our meal was followed by a mustering of the voyage crew on the main deck for a revision session by Fosse on the procedures for man over board, fire and abandon ship. Doctor Bob provided a reminder of the keys points of hypothermia management and prevention.

The afternoon was filled with the delights of iceberg watching and climbing the rigging in glorious sunshine, that gradually hid behind the high clouds as it got gradually windier and chilly. Weddell, Crab-eater and Leopard seals were all seen. Meanwhile the Captain and crew were steering us to Devil Island and Cape Well-met, the scene of another epic moment in the Nordenskjold saga, when the three Hope Bay refugees literally walked into Nordenskjold’s sledging party, exploring the Prince Gustav Channel on 12 October 1903.

During a few hours we could enjoy the glaciated scenery and the islands and coasts around us. One of the most eye catching island we pass by is the typical Rosamel. With its circular shape is just 1nm in diameter with precipitous cliffs of volcanic rock rising to a snow-covered peak 435 m high, lying in the middle of the Southern entrance to Antarctic Sound. It was already discovered by the French expedition during the years 1837-40, under Capt. Jules Dumont d'Urville, and named by him for V. Admiral Claude de Rosamel, French Minister of Marine under whose orders the expedition sailed.

Like this we made our way on a ESE course, reaching our southernmost point in the Weddell sea after supper, following arduous hours of complicated steering through heavily glaciated waters. Devil and Vega Islands were still shielded by large and compact ice floes, preventing any attempt to get to their shores. Three bells were sounded and we gathered on the main deck to inspect this forbidding place with its imposing cape. while Dr Bob retold the story of this extraordinary meeting, which had a touch of the ridiculous about it as the two groups initially exchanged pleasantries as they didn’t recognise each other.

From here, and expecting a forecasted wind chance that is about to start blowing from the South, Europa turns around planning to sail overnight amongst the ice, to reach the Antarctic Sound in the morning.

The evening entertainment was the video Baraka in the lounge and conviviality in the deck-house at the end of another gran day in the remarkable Weddell Sea..