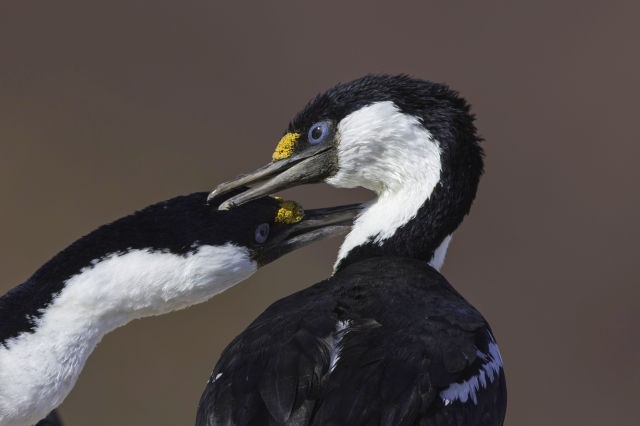 Paulet Island and starting our way offthe Weddell Sea With today’s visit to Paulet Island we successfully complete our Weddell Sea program, also leaving behind the footsteps of the Swedish Antarctic Expedition led by Otto Nordenskjöld in 1901 to 1904.

On three of our landfalls we visited the places where their three parties were stranded and obliged to overwinter on that incredible story of Polar adventure, scientific work, struggle for survival and, why not, lucky coincidences. Besides those historical sites we have enjoyed the Weddell Sea’s wild and absolute beauty, its difficulties and uncertainties, the severe icy waters, the desolate landscapes and its wildlife, in 1950 all described by Thomas Henry as “the most treacherous and dismal region on earth”. We managed to drop anchor around 03:30h at the NE coast of Paulet Island, in just 7m of water under the keel, letting go 3 shackles in an attempt to try to keep the anchor to hold on despite the strong winds. Anchoring in this shallow depth we ensure that at least the bigger icebergs will not come to pay us a visit on their drift. But the smaller ones still float and move around us. Getting here wasn’t easy, motoring during the afternoon and night fighting against heavy ice conditions and increasing winds, which reached 45kn during strong gusts.

On top of all, the navigation was done in freezing temperatures that added to the strong winds made us feel really cold while steering from deck. But in the morning all looks pretty good to go ashore. After our pre-landing briefing, right when breakfast is finished, we drop the zodiacs and go ashore to visit that beautiful volcanic island. Paulet is circular with a diameter of 1.5 km and it is located 4.5 km south-east of Dundee Island, in the north-east end of the Antarctic Peninsula. It is believed by geologists, that this volcano made its last eruption more than 1000 years ago. James Clark Ross named the island after discovering it during his expedition from 1839 to 1843. The name was to honour Captain George Paulet of the Royal Navy. Paulet is a well-known island because it is home to a large Adélie penguin colony and numerous nests of Antarctic Shags along the northern shores of the island. But Paulet became legendary because it is the place where Carl Anton Larsen (Captain of the “Antarctic”, the shipwrecked boat of Nordenskjöld’s Expedition) and his crew spent 10 months waiting for rescue. After the sinking of their boat, the group managed to reach Paulet Island after 16 days across the pack-ice.

They built a hut from rocks and salvaged wood from their boats. Larsen and the 20 crew of the Antarctic killed 1100 Adélie penguins and stored them. During the winter one person, Ole Wennersgaard, died of an unknown illness. He is buried here and his grave is visible in the midst of hundreds of Adelie penguin nests. During our walk ashore we could see all those remains from the beginning of the 20th century. Furthermore, as we enjoy the great scenery under the sun, blue skies and strong winds, all over we can see what is left behind after large amount of Adélie Penguins have left: pink-orange guano, some moulting adults, dispersed youngster crèches and quite a lot of dead chicks that never made it to fledge when the rest of the colony start their migration this time in the season. Antarctic Shag chicks are already flying around, and many breeders wander around their nests, displaying pair bonding and preening behaviour. Getting their plumage ready and thinking on the upcoming migration. On the countless icebergs surrounding the shallows around the North coast of the island, plentiful seals snooze, including Weddell’s and Crab eaters, while many Fur seals are resting on the beach.

Besides the wildlife the grandeur of the scenery is astonishing: the volcanic landscape with its warm colours, green lakes filling up old craters, the icy waters of the Weddell Sea surrounding us and the ice capped Dundee and Joinville Islands in the background. During the windy landing and despite the good weather, the temperature didn’t rise much above 1ºC, even being of -1ºC early in the morning. The water temperature has remained around 0ºC, or even less, from yesterday. While we were ashore, on board they were having their own adventure, as the gusting wind started to increase again, blowing even at 40kn for moments. Under those conditions and being at anchor over rocky bottom, Europa starts dragging while numerous bergy bits and icebergs pass drifting close by. The anchor comes up and the ship waits for us under engine, trying to keep her position close to shore. When we are done ashore, the zodiacs are quickly sent to pick us up and we start our way out of the Weddell Sea straight away through the Antarctic Sound.

Again 30 to over 35kn of wind blow on our nose while we first round Paulet, then changing course to go around Cape Purvis in Dundee Island, afterwards leaving Joinville Island on our starboard side and getting into the Bransfield Strait to start making our way towards Elephant Island. Having time enough, and in order to get more proper winds according to the forecast, we still have a chance to land in the South Shetlands again tomorrow, before heading North-eastwards to the famous and unforgiving Elephant Island. With the program we followed the last days, we finished following the adventures and misadventures of the Swedish Antarctic Expedition under Nordenskjöld (1901-03). Now we swap to the hardships of Shackleton’s polar odyssey for survival. Both Elephant Island and South Georgia played an utmost important part in the events following the wreck of the “Endurance” in the Weddell Sea.

But first we still have to struggle motoring against the headwinds blowing into the Antarctic Sound. After lunch, the weather changes gradually from sunny blue skies in the morning, becoming overcast in the afternoon. At the beginning all looks pretty free of ice, with occasional growlers and icebergs, plus several big tabular icebergs scattered all around, making it easier to steer into the stubborn headwinds. As we make our way on a NW-ly course towards the Bransfield Strait we pass by a field of enormous tabular icebergs and an increasing number of icebergs before encountering more open waters, motoring half ahead but just doing between 3 to 4kn of speed. Later on, from by dinnertime onwards, the wind start to eases down considerably, but due to the heavy fog conditions and to conserve fuel, we keep a low speed. Eduardo and Jordi