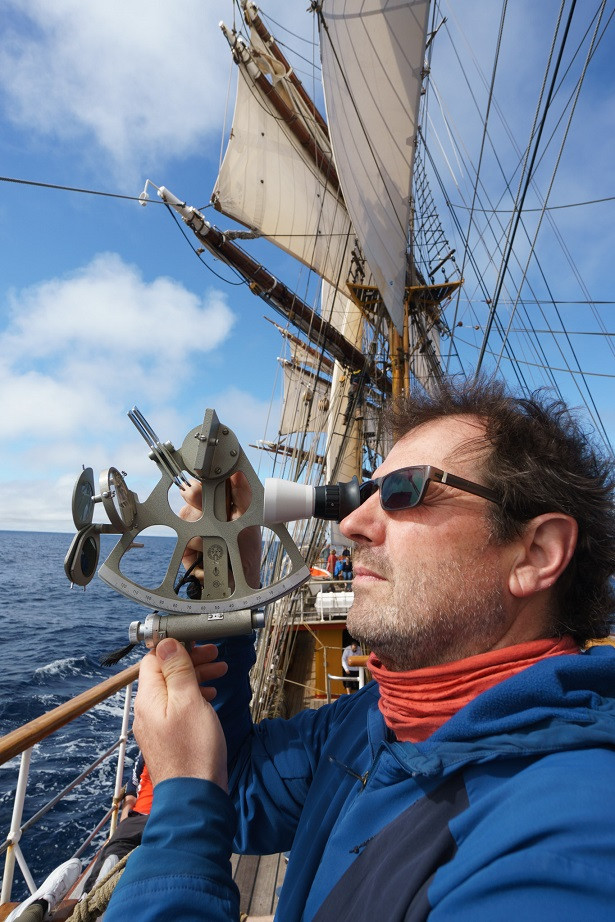 Under easing winds to just a light breeze already during last night, engine work is required to keep on going on our Easterly course towards South Africa. Hands are called on deck for sail handling. From the full rig set, first all the squares are clewed up, Royals, Top Gallants and Courses furled, Staysails sheeted down. Then we can all hear the roar of the motors.

Today being April 1st, April Fools Day, the light winds started fooling around early morning, shifting to S-ly and making for bracing around the yards sharp to Starboard tack, together with passing over the stays the staysails that remain hoisted. Just finishing the job, the sun rises in from of the ship while a spectacular cloud grows and rolls rapidly at our wake, fooling all with a menacing guise that ends up just engulfing the Europa in a thin mist.

Low floaty clouds that luckily didn’t last long, leaving behind a clear morning. With the sun shining, there was a good opportunity to keep putting into practice the lessons learned in the last days about the mystified celestial navigation. Traditional methods which allowed mariners to sail across the vast oceans until the modern satellite communications and positioning developments.

Dead-reckoning, allowed to estimate the current position using calculations on course and speed based on a previously determined one. Keeping a constant good ship’s log and the knowledge of the seas and their currents are the base for getting a more or less accurate location. Astronavigation came as an aid for more precise positioning, ending up with the development of the mechanical wonder of the Sextant and all the maths and calculations behind it.

By using it what is actually done is measuring the angle between a celestial body (most commonly the sun but also are usable as the moon and many stars) and the horizon, then using calculations and conversion tables to project its zenith to hit the center of the Earth. For that, a sextant and a clock are essential, as at any determined time the celestial bodies are located over one point on the planet’s surface, which latitude and longitude are known as the “celestial body’s geographic position” and are listed on tables on the Nautical Almanac for that specific year.

The most used and simples sights to take are the “noon sights” of the sun and the use of the Polar Star. In the northern hemisphere, the latter one always indicates the North, and its angle to the horizon gives us the Latitude.

Using the sun when it shines on its highest position gives straight away a latitude line. Latitude calculations require knowing the exact time when a celestial body projection hits the earth’s surface. A “timing” problem for many years until the development of accurate seaworthy watches. A mechanical conundrum solved by John Harrison with his marvel watch, was first tested on a long sea voyage in 1761.

Precise methods for positioning brought the elaboration of better and better sea charts, opening the oceans and their coasts for safer exploration. Sailing, exploring, safe sail handling for long journeys at sea, it all starts from knowing your ship and how it works. And the Europa workings are based on sails and their countless lines, some to pull, some to ease, depending on what is needed at any given time. Essential then is to know which rope to handle, and today the knowledge acquired so far during the trip was put to test through the Europa’s traditional “inter-watches Pinrail Chase”, set sail and tie knots.

With everyone on deck, lines were called and a selection of voyage crew had to rush for it, first just walking, then handicapped, first by having a potato between their legs trying not to drop it, and then placing a pin between two pairs of knees.

A couple of the most used knots up the rig were called afterward and the game ended with a quick dousing and setting properly the Fore-Top Mast Staysail.

All good fun and laughs for everybody in a game-competitive atmosphere, but not the last of those sorts of activities today, as in the evening the awaited “South Georgia Auction” took place in the deckhouse.

From the day we visited Grytviken, we carried on board several items for auctioning, for benefit of the South Georgia Heritage Trust. Bark Europa added to the different items to sell the worn-out and torn Dutch flag that has been flying on the Mizzen Mast since the beginning of our voyage. And from the very same day we toasted in Shackleton’s grave with the very special “Shackleton Expedition Whiskey” that the fellow traveler Ron brought with him, the still remaining half bottle was in for the game as well.

The whole event was a success, raising a total of over €1800,- as a contribution for Habitat Restoration Projects, Maintenance, and to keep running the conservation campaigns on this nature's bounty island.