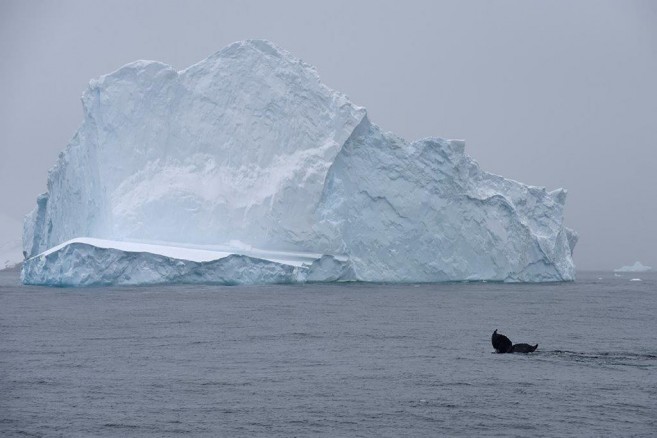 We always have plans. Plans that work for the schedule, plans that work in combination with the ships around us, plans that fit our other plans. Logical plans, beautiful plans, practical plans. But if these plans wake up to gusts of 53 knots – they quickly loose their status of plan A. Plan A will always be the wind. Working in the Arctic and the Antarctic you learn pretty fast that the weather always decides. You learn not to spent time being sorry for your plans. You just try to see what the weather would like. Well, today she definitely did not plan for a zodiac cruise at Spert island – or a landing at Mikkelsen Harbour. No, she planned on blowing full force out of Orleans Strait. Our Captain had been studying her wishes during the early morning and thought the best option for calmer conditions would be Cierva Cove – a place we had originally planned for the evening. So we went. We crossed Orleans strait – the wind kept blowing. We stuck our head out of the warm deckhouse every now and then – had some tea, a nap, a look through the window. Sarah, always looking for a good reason to tell this story, decided the weather was a perfect reason and told us about the Swedish Expedition  – about Nordenskiold and the ship the Antarctic (1901-1903). Followed by coffee and another nap the morning went on nicely. As we came further in to Cierva Cove, things calmed down. Surrounded by
smaller and bigger pieces of glacier ice, the snow gathering as a fragile layer of white on the water, mountains and glacier hidden in fog. We spent the morning cruising through this enveloped world – many were up in the mast or out on the bowsprit. After we went further South, heading for Graham Passage. It started snowing a bit less – the fog lifted quite a bit – and suddenly, in the evening, they were there. The humpback whales. Different groups of 4 or more whales each. They where feeding, surfacing every other moment. They were there, all around. At the Northern end of the passage an later during the evening at the Southern end as well. As we had given our plans to the wind we had nothing to run to, no time pressure and no need to hurry. We stayed with the whales for a good while, before going through the most narrow part of Graham Passage – steep glaciers and ice on both sides. We were lucky today - if this could have been planned it would have been plan A.

Whales, whales and even more whales how wonderful........good planning Plan A!