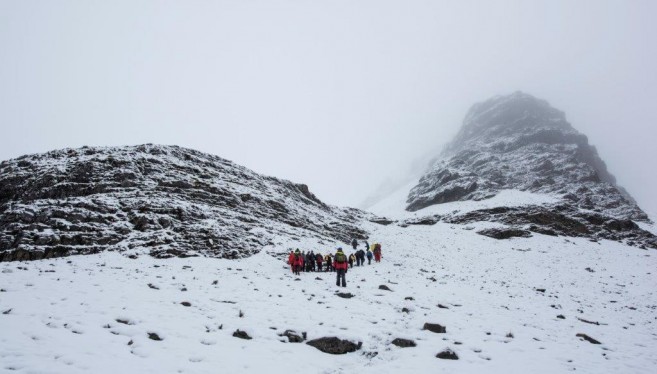 With the crew on watch advised to keep a good eye on the weather overnight in case the forecasted strong winds hit our anchor place at Prince Olav Harbour and was necessary to leave, at the end luckily we spent a calm night, and were welcomed by a quiet and snowy morning. There is not much shelter that South Georgia can offer in this area, but this place is considered to be one of the best protected bays on that stretch of coast. This and the large amount of seals around, attracted the sealing industry first and whaling afterwards. Prince Olav is located at the entrance of the large Possession Bay, bearing this name because that is considered the place where Captain James Cook first set foot on land, and took possession of the island for Great Britain, naming it George Island, after King George III. The exact whereabouts of this historical landfall are unknown, his logbook describes a place that might very well have been Prince Olav Harbour. Cook explored South Georgia on his 1772-1775 expedition on board the Resolution, being most likely the first human to set foot on the island, that he meticulously charted. Who knows if at the same place, we plan to land during the morning. Laying in front of us, at the head of the bay we can see the derelict Prince Olav Whaling Station. As it happens in all old whaling stations in South Georgia, with the exception of Grytviken, there is clearly marked 200m perimeter around them, not to be crossed. Their advanced state of decay lose debris and airborne asbestos makes good reasons to follow this restriction. The wet snowy conditions improve gradually while we are all having breakfast, and by the time we are shuttled ashore, the skies continue to be overcast, but at least the weather is dryer. The layer of snow that
covers the mountains and rugged landscape that surrounds the bay, adds a special touch to the scenery. The landing little hike took us to a couple of scenic viewpoints that offer great views of the whole area and the ruined station down below our feet. Still its working procedures and structure can be easily appreciated. A large wooden platform in the middle of the station can be clearly seen, where the whales were taken on land to be flensed in pieces, that then were brought to the blubber, meat and bone boilers to render the valuable oil. All visible almost 90 years after the place was
abandoned. Close to the station, almost on shore and surrounded by kelp forests a partly overgrown by tussock grass, sits the iron hull of a shipwreck. It is the Brutus, built in 1883 and after serving as a nitrate transport vessel, was towed into the bay by four whaling vessels, to be used as a coal hulk. But the place was used and acknowledged by early sealers years before the whaling history of Prince Olav. By then, this harbor was known under quite a different name; they called it Crows-Nest, or Crow-Harbour. At that time it was also known as Rat Harbour – as it was probably one of
the first places were rats were introduced in South Georgia. A big center of the fur sealing operations was developed here, serving as a safe haven for the rich sealing grounds around. Much later, Norwegians whalers arrived and renamed it Prince Olaf-Hafen, in honour of their Crown prince. To start with, it became a base for a floating factory ship (that wrecked in England in the 1916-1917 season), becoming afterwards an entirely shore based and operational Station until the top whaling season of 1930-1931. Many pictures were taken from up the hills, of the whole bay with the
elegant Europa laying at anchor amongst kelp forests and adding a different touch to the scenery. As we all well know, she was actually built in 1911, even before the whaling base was established here, and adds context to the landscape. As we were about to make our way down the hills and finish our activities at Prince Olav Harbour, clouds loaded with snow could be seen approaching the bay, indicating us that it was time to leave the anchorage. And indeed, as soon as we are all on board and the zodiacs are stack on deck, the first strong gusts and squally conditions reached us. From then on Europa makes her way deeper into Possession bay. For the rest of the afternoon the blizzard blowing all over the area didn’t allow for a good view, and less for a landing. Winds varying from 20 to
45kn and snowfall made for a quiet few hours indoors, while the Europa hold her ground at anchor in front of the so-called Brighton beach. To arrive here we had to sail over a shallow reef that crosses the whole bay, that nevertheless helps dumping down the swell that enters Possession Bay. From time to time a clear area between the low clouds let us have a glimpse of the beach and the surrounding glaciers. Up between the high mountains is the glaciated saddle where Shackleton and his men could have a look at the Northeastern coasts of the island when climbing up from their landing site at King Haakon Bay. On board we use the afternoon to learn a bit more about Seals, of which we have already seen many of the species already we have seen during this trip. Staring with their general biology and habits, Jordi narrowed it gradually to the different species and their characteristics. The plan was to spend the night at that anchorage, and early in the morning make our way to the neighbor Fortuna, where we plan the next activities. But gusty winds again made for heaving up in the middle of the night and slowly make our way there.

Thanks Jordi for all interesting information and stories. Great to read!