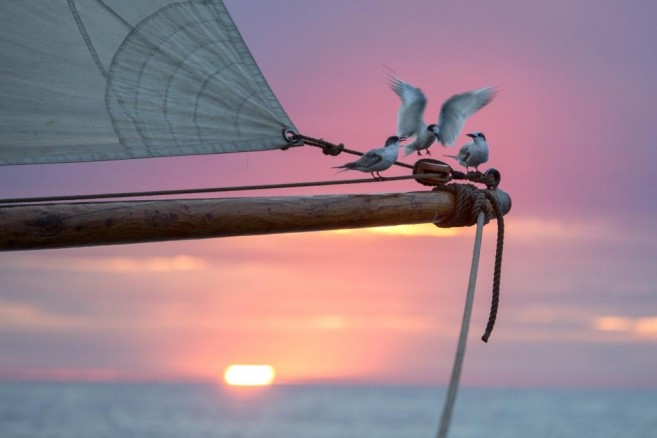 Fair winds dying to flat calm conditions. Lots of feathered friends and Dolphins around. Today we reached the 50º S, and according to the Traditional Cape Horners Society of Captains in St Malo, this is the latitude where the Cape Horn crossing starts.

Today we reached the 50º S, and according to the Traditional Cape Horners Society of Captains in St Malo, this is the latitude where the Cape Horn crossing starts. Crossing the latitudes of 50ºS in the Atlantic to 50ºS in the Pacific, rounding Cape Horn Westwards. Until now we have been enjoying the sailing down the Brazilian, Uruguayan and Argentinean coast as part of the also necessary 3000 nautical miles using only sailpower required for the proper Cape Horn doubling.

And the 50º S welcomed us with fair winds and great sailing. Blowing up to Northerly 27 knots in the morning, following seas and blue skies. We enjoy being on the move again on the right direction towards Cape Horn.

But again, during the afternoon the wind starts to ease down, time to set the three Studding sails on Starboard, but just for a while, and soon they are taken down in the afternoon when we gybe to port tack, then to be set again after dinner, after gybing to Starboard tack.

As the evening passes and the night comes, we find ourselves on dead calm conditions, with the little wind backing to NW. And around 23:00h we have a wind shift of about 90º. For a while we are busy on deck, changing all sail configuration, trying to keep a S-ly course, still on light airs, hoping for the wind to increase in the morning.

We still try to sail around the Horn, even if our chances to accomplish the whole crossing are pretty small within the time left and the weather forecast.

Today ship’s clocks went back an hour, to match the Argentinean and Chilean time. Captain and Mate used this extra hour today in the afternoon for a drill, at the watch changeover. The wind was decreasing and we sailed on pretty stable conditions, with just a bit of swell from the aft, and then we could hear seven short bells followed by a continuous ring, and Klaas voice over the speakers calling for Abandon Ship drill. We all gathered on deck where we were mustered, while the crew was giving us life jackets, collecting emergency equipment, emergency suits, supplies, preparing sloopy to be launched, checking the cabins and closing watertight doors in the corridors.

As we slowly sail through the afternoon calm conditions, multitude of Terns come and visit us, now it’s not just Wim & Wim, but they told a great number of friends about the Europa and they all came to join us for a few hours. All our feathered friends were mostly using the Studding sails booms to take a rest, clean themselves and as fishing platforms. Beautiful birds that stood there even when we set the Studding sails, just going away for a minute before landing again, protesting about the disturbance those humans were with their canvas and ropes! As the night comes they start flying away, after offering good photo opportunities as the sun sets behind them in the horizon.

Peale’s dolphins have been around in several occasions during the day. Small groups come and check the Europa, staying around for an hour or so, disappearing afterwards and then appearing again a while after. Peale’s typically occur in small groups in coastal and shallow waters in either Pacific or Atlantic Patagonia including the Falkland Islands, occasionally reaching latitudes close to 30º S.

We follow your rounding attempt closely from Sweden with great sympathy, you have experienced quite tricky winds lately.... Hope that the expected spell of northerlies expected tomorrow will give you some help! And thanks again for the great blog posts, they are much appreciated!